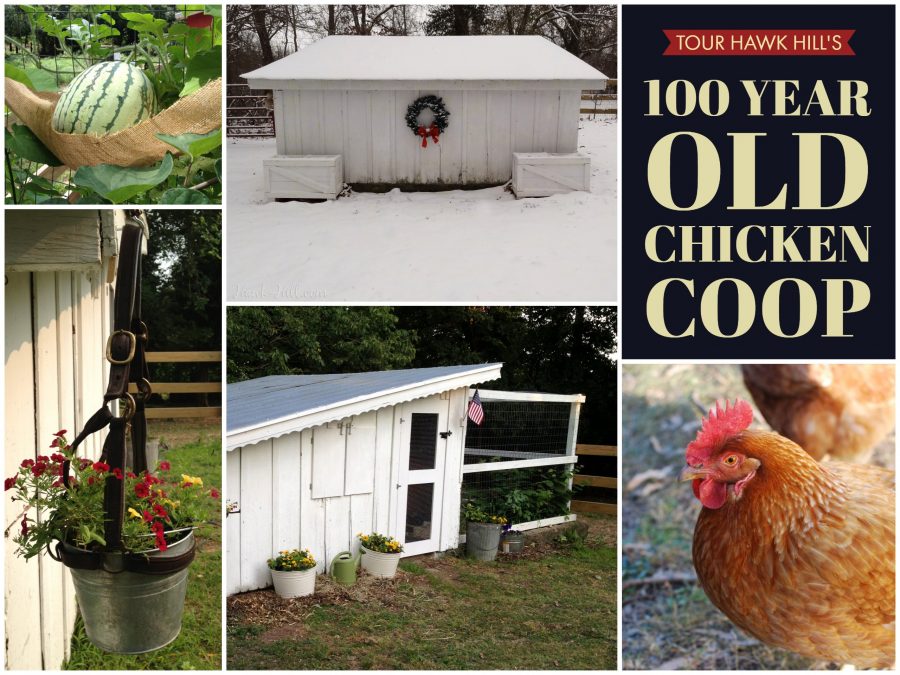 An older chicken coop can still work great for keeping chickens today – in fact it may even be a far better home for chickens than many of the “modern” designs. Today, the most popular chicken coops are actually the cheapest,  and the “best” coops in the eyes a manufacturers are coops that ship inexpensively– that means lightweight and low-grade materials. 100 years ago, however, coops were built very differently. The hundred-year-old chicken coop at Hawk Hill features a concrete pad, a raised run with concrete retaining wall, thick interior beams, and solid wood siding. With a roof kept in good repair, this siding has survived decades. Although it needed repairs when I moved my chickens into what had been used only as a storage space for many years, I didn’t have to replace any exterior paneling or structural part – just some reinforcements on the inside. Although the unprotected structure of the exterior run had rotted away long before, it was a one day project to add posts, beams, and wire mesh to create a modern chicken run.

If you aren’t lucky enough to have an old chicken coop on your property, it doesn’t mean you can’t enjoy the benefits of one of these sturdy older style coops. In this post, I’ve outlined some of my favorite features about my vintage chicken coop that are missing in modern designs. If you’re building your own coop, you can integrate these older building techniques to create a stronger, healthier, and easier to maintain chicken coop.

I’m not actually sure how old my chicken coop is but the house at Hawk Hill was built pre-1920’s and the dimensions of the lumber in the coop, as well as the style of the foundation, seem to indicate the coop was erected around the same time. Because of construction similarities, I suspect this coop and the original horse barn were built around the same time as the house, making both about 100 years old.

As the construction of new chicken houses is again popular, I thought it might be helpful to share a coop still standing from the previous generation of folks who raised backyard chickens.

Note: This post shows the external features of the coop, for an internal view see my post on 100 Year Old Chicken Coop – INTERIOR.

Features I Love About My Old Fashion  Chicken Coop:

1. A long and low sloped roof

The long and low room of my coop maximizes floor space for the chickens and would have cut the original builder’s material costs in half. It also helps redirect lots of rainwater far away from the uncovered chicken run.

The enclosed part of this coop measures 12ft x 10ft. It has a door on both sides, under the tallest part of the roof. The coop just tall enough that I, at 5’6″, can walk through without stooping. At the tall end, the rafters are about 6′ from the floor, on the short end the rafters are just 2-3 feet above the floor. The shorter end can be a bit of a pain to clean, but the well thought out size means that with a slight stoop, a rake can reach the shortest end easily.

A bank barn is a style of old barn that’s built into a hill- so the flat foundation results in a partially buried barn. This coop seems to be the inverse of that- using the natural slope of the land to make one door to the coop ground level and the other elevated (just right to simple shove soiled bedding into a waiting wheelbarrow without any need to scoop or shovel).  I discuss this further and show pictures on my post about the interior of my old chicken coop, but because my coop is built into a slope, the “back door” of my coop has a threshold that is roughly 18-24″ above the ground. This rise is perfect for parking a wheelbarrow under, allowing bedding clean out to be a simple process of sweeping bedding into the waiting wheelbarrow below.

I think the smartest part of this vintage coop design is the outdoor run that is basically a large raised bed (like you’d find in a garden) with thick concrete sides. This design made the run easy to predator-proof and means mud and puddles are never a problem in the chicken run- even heavy downpours drain off immediately.

Rather than standard concrete, a mixture of gravel was added to the concrete, saving the original builders money and creating a foundation that endures. (In my last old home, the builder used large decorative rocks to stretch the concrete of the foundation, as was common practice then)

When I bought Hawk Hill in late 2010 this coop was a rotting, leaking building used for storage- in fact, the very first bird I put inside escaped through a loose board in the siding in what I’m sure was a very comical scene! Since from 2010-2015, I did lots of repairs and upgrades to make this coop a comfortable, renovated home for modern chickens.

Modern upgrades to my old coop:

These reach-through nesting boxes were my most recent upgrade, added in 2013. Nesting boxes were easily added by hanging small wood shipping crates on the inside of the coop, cutting holes in the exterior wall, and installing doors. We’ve not had any predator problems, and this rotating wood block style lock has, so far, been sufficient.

I love cheering the coop up with a little bit of simple landscaping. Planters seem to keep the chickens from doing too much damage when they are free ranging. The coop sits on a very prominent spot on my property, so it is a nice canvas to decorate for the seasons. I really like how the thick concrete foundation of the coop corrects for the changing slope of the property in this area. 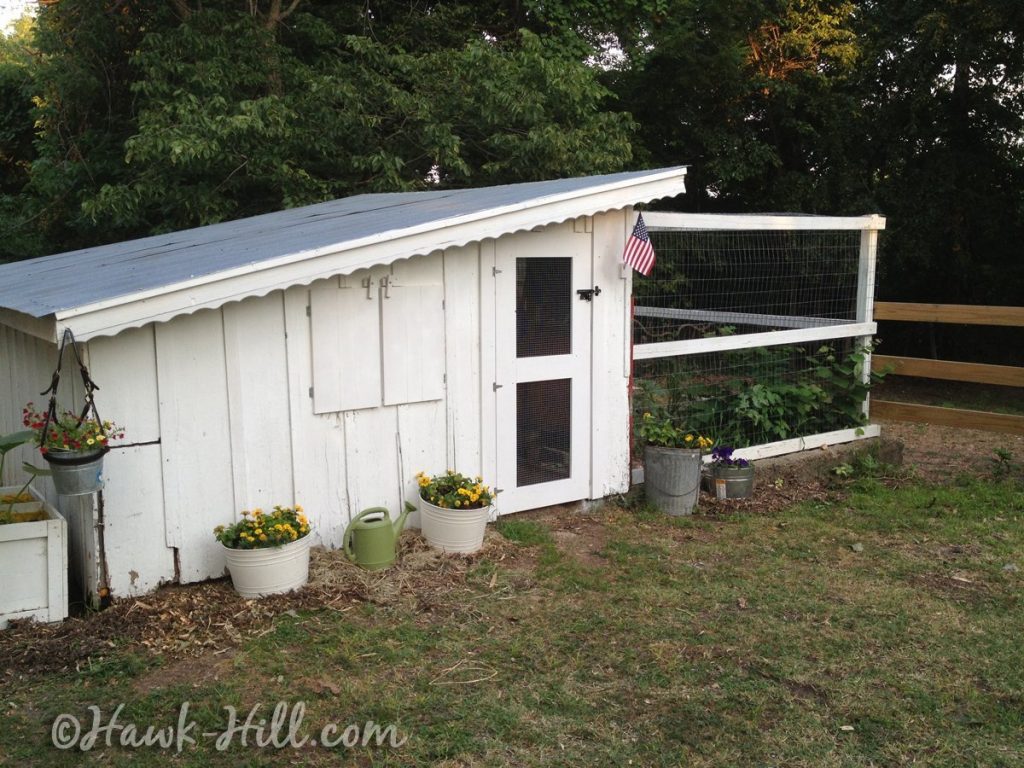 Love sneaking in some equestrian decor into the garden, see the DIY tutorial for this halter flower holder here: 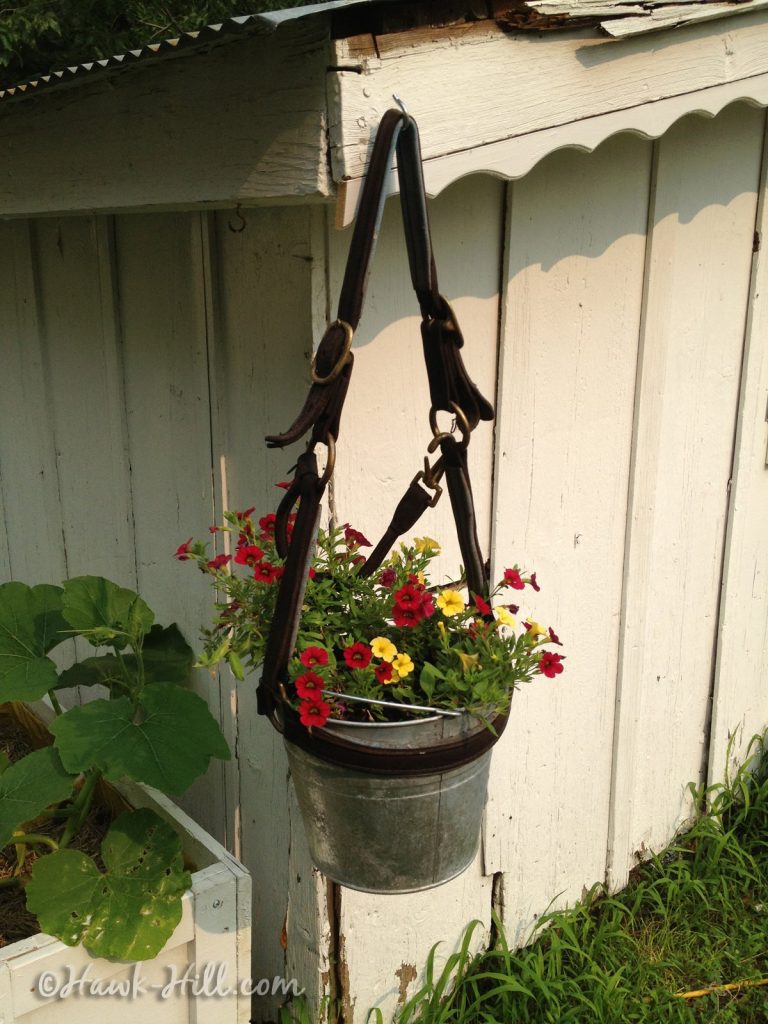 And here’s a shot of my barred rock hen, Eleanor, enjoying the chicken run (and the Rhode Island Red, Trudy, hiding behind the plant in the center). You may notice I have quite a few plants surviving in my run- read more about my methods for keeping green growth in a chicken run. 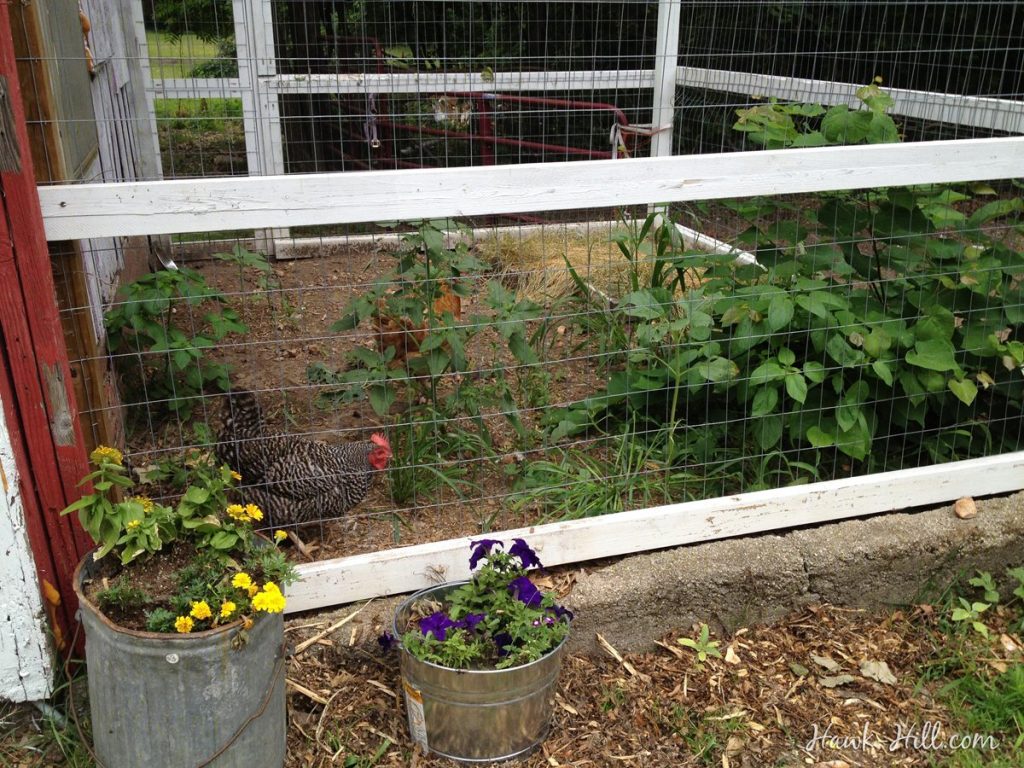 Want to see inside?

For interior views of my 100 year old coop, see my article on My Chicken Coop’s Interior. 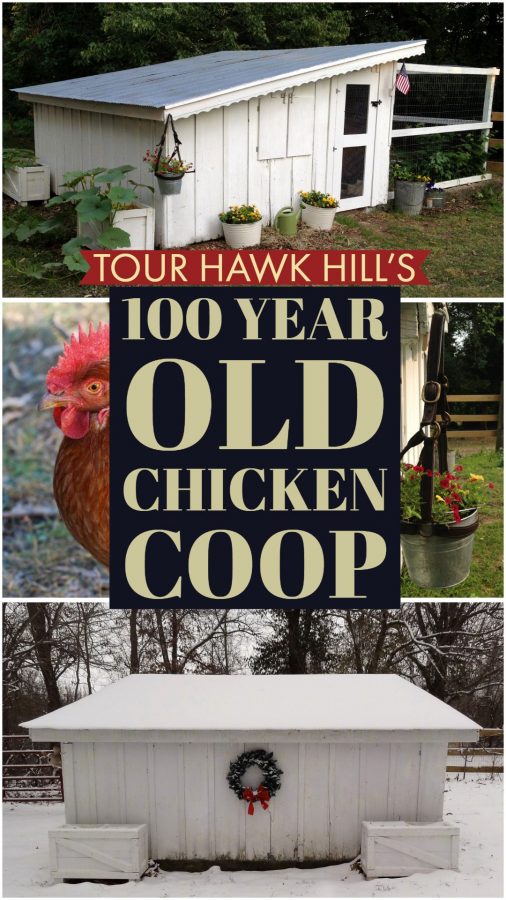