Growing Watermelons Vertically on a Trellis, Fence, or a Chicken Coop

You might be surprised to learn that watermelon plants love growing on a trellis! Although the tendrils of a watermelon vine aren’t strong enough to search out and climb a vertical support on their own, with a little bit of human help, watermelons thrive when grown off the ground.

By elevating watermelon, you can 1. save space in your garden, 2. add shade to plants (or chickens) underneath the vines, and 3. help your watermelon plants be healthier, lusher, and grow bigger yields. 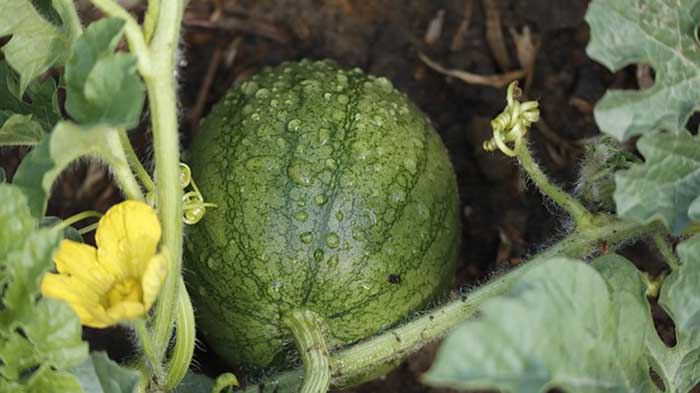 Watermelon plants are susceptible to a type of leaf fungus called  Powdery Mildew that is caused by moisture remaining on the leaves overnight. By elevating your watermelon vines, you can increase airflow to the leaves, reduce moisture left on leaves after rain, eliminate completely leaf-surface moisture from watering (you’ll only be watering the base of the plant), and significantly increase watermelon yield.

Trellised on a chicken coop, the benefits are mutual: supporting healthier chickens and bigger watermelon yields Part 2 of this article discusses growing near- and for- chickens in depth: 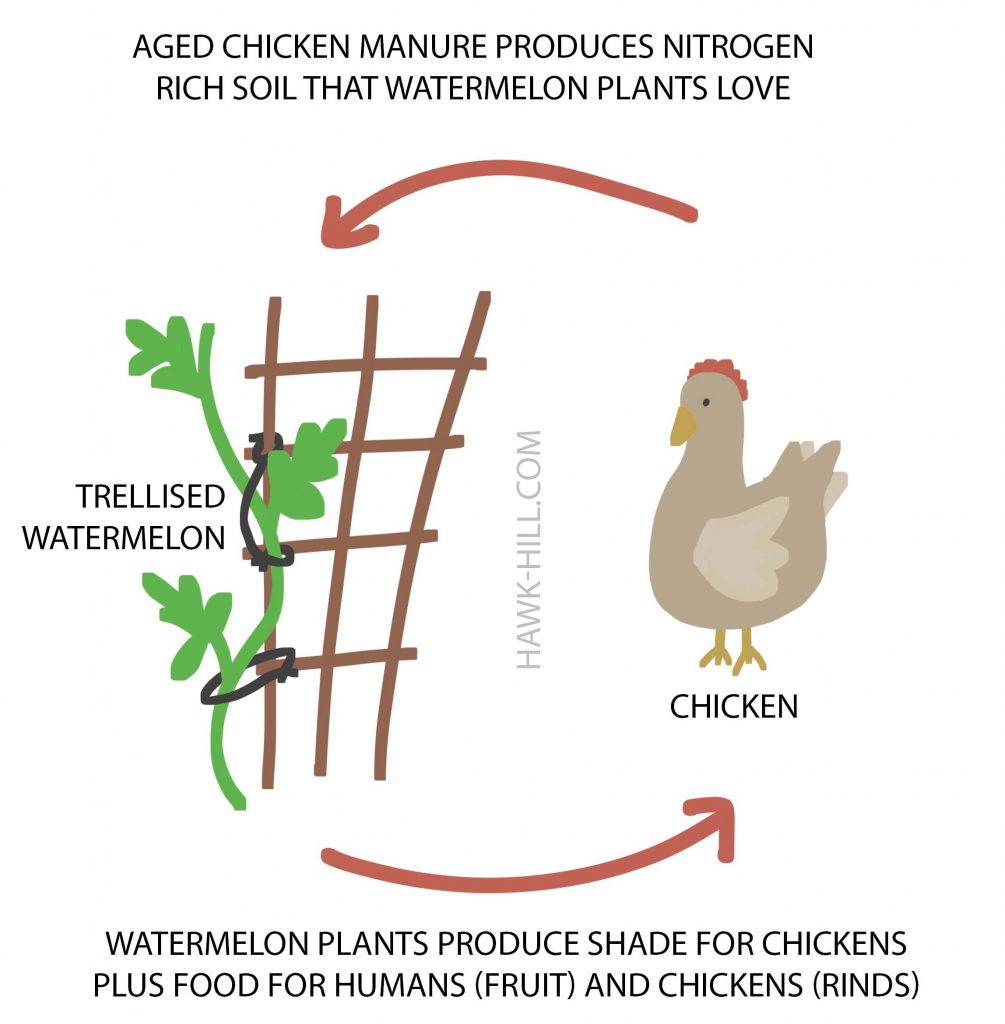 Hot to Make a Watermelon Trellis

Plants like peas and cucumbers enthusiastically vine without support, but watermelons need some coaxing in the form of plant ties. You can purchase cushioned twist-tie type garden ties, but I have always made my own. Growing up, my grandmother taught me to use old nylon pantyhose cut into loops to secure plants. As pantyhose finally made their exit from women’s clothing, I chose a more environmentally friendly replacement. Nowadays, I cut my ties from natural textiles I’ve thrifted or picked up at garage sales. Knit cotton is strong enough to support watermelon vines through a whole season and biodegrade naturally at the end of the season. This year, I’m actually using cashmere scored from the Goodwell outlet – it’s super soft, super stretchy, and perfect for supporting delicate plants.

Training your watermelon to climb a trellis

like many vining plants, growing your plant on a trellis is little more than a matter of aiming the vines in the right direction. Tie loose loops to hold the vine in place on the trellis. You never want to cut off “circulation” in the vine, so I recommend using large fixed loops that simply hold the vine in proximity, while also letting it wave loosely. Another option is to use a longer tie and tie one end of the tie loosely around vine and the other end of the tie around the trellis support. This can be helpful for training, as a small amount of tension can be left in order to “pull” the vine up the trellis.

Your vines might need gentle coaxing to grow upward instead of crawling across the ground. Always handle the vines gently – for vines that don’t easily redirect in the direction of the trellis, put a stake in the ground midway between the vine and the trellis and train the vine to climb the stake by using a tie to secure the vine loosely to the stake. After a few days, the plant will naturally yield in the direction it’s being held, and you’ll be able to manipulate the vine further over onto the trellis.

As your melons grow, they’ll need a little support. When a baby watermelon reaches fist-size, you should give it some extra support with a sling or hammock. Encourage melons to grow their biggest by pinching all but 2-3 melons.

As my watermelon vine extended up the chicken coop, I constructed slings with burlap to bear the weight of the melons until they were ready to harvest. 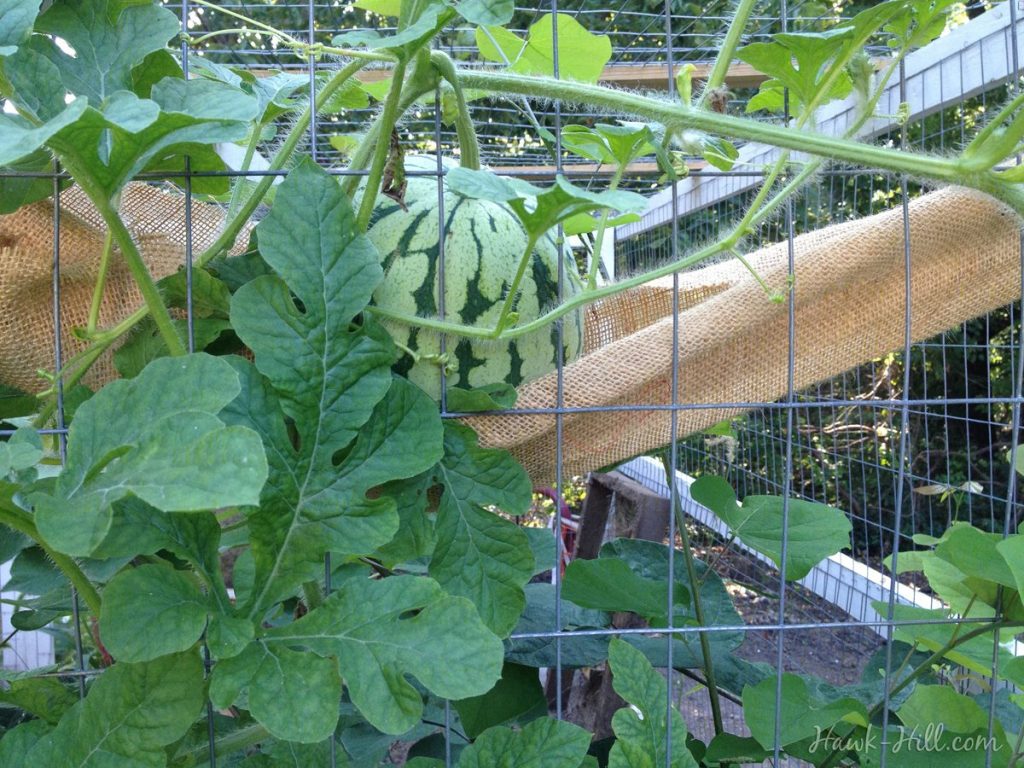 Before I trellised my watermelons I never had satisfying yields from my melon patch. Despite many attempts, at best, each summer I’d get one or two melons from a patch of 4-6 plants. Once I started trellising my watermelons that all changed! With my watermelons planted in the nitrogen-rich soil around my chicken coop, they thrive. In the blazing sun of the Missouri heat, they explode with growth over the chicken coop. Their ariel location means Powdering Mildew never gets a foothold, and leaves are healthy and fully dedicated to pumping energy into the swelling watermelons. When the vines each the horizontal wire panels at the top of my chicken run, they really grow wild. With my trellis watermelons I get at least two watermelons per plant – and with the melons suspended about 5ft in the air I haven’t lost a single melon to garden pests!

Like a lot of chicken owners, I struggle to get anything green to grow in my chicken coop. Last spring, totally out of space in my garden, I decided to experiment with growing watermelons vertically up the “trellis” of my chicken coop’s run, and it went so well that I eventually added it to my top tips for chicken coop landscaping.

Growing vining plants vertically near chickens can maximize space while creating a symbiotic garden relationship.  Watermelons are a particularly good choice because watermelons thrive in the high nitrogen soil in areas near coops and chicken runs.

Below are some photos of my first watermelon vine growing up from where I’d simply tucked a leftover plant into the ground next to the coop after running out of space in my prepared garden beds. Planted just outside the chicken run (and with a bit of wire mesh placed around the seedling to protect it from free-ranging hens) the plant thrived. Every week or two I’d redirect any tendrils wandering along the ground up onto the wiring of the coop. Eventually, the vine spanned across an entire side and onto the roof, providing shade for hens in the summer.

Watermelons grow well near chicken coops for a few reasons:

I was pleased to find that either the hens didn’t like the taste enough to peck at the plant through the wire mesh, or just were not able to do much damage given that so little was within reach of their beaks.

I trimmed most competing fruit from my vine and focused its growing powers on just two melons.

One thought on “Growing Watermelons Vertically on a Trellis, Fence, or a Chicken Coop”