When I first began taking elaborate hand-lettered notes I experimented with using lots of colors and varying pen styles, but I found through trial and error that the more action on the page, the more overwhelming my doodle notes were when I went back to study them. Over time, I’ve found my style is to use one or two multiliner nib sizes, 2-3 marker colors, and 3-4 matched shades of grey. Since grey shading with markers is a technique unfamiliar to most, I’ve written this post as a tutorial to get you started.

Grey shading one of my best bullet journal tips to add depth and interest to your bullet journal layout. Once you have the right supplies and get the hang of it, it’s quick, easy, and really adds a “wow” factor to creative class notes and bullet journals.

Products linked below have been researched and tested on this project. As an amazon associate, we earn from qualifying purchases.

I use four markers* in this tutorial:

A N0 Copic Sketch Marker, a N1 Copic Sketch, and a N2 Copic Sketch Marker as well as a Copic Colorless Blender. Copic pens aren’t cheap- they run between $6-$9, but I’ve tested a few grey highlighters and I have not found a substitute for that blends like Copics. The good news is that Copic’s have replaceable nibs and replaceable ink so, theoretically, they will last forever. (I currently have markers in my DIY copic marker storage case that are 10 years old and, with refills, still going strong)

The “N” in the color name/number above indicates they are a neutral tones of grey (rather than the bluish cool tones, or reddish yellow warm tones of grey). You can create a slightly different effect with the other colors, but unless you are a professional comic or portrait artist, the neutral grey highlighter markers are more than enough for the average journaler or note taker.

*Copics are my go-to, but art markers aren’t a great fit for a student budget. For a cheaper option, try the Zebra MildLiner in Grey (essentially, a grey highlighter available for about $3). Though it doesn’t blend, it works fine for creating basic drop-shadows. Experiment with this grey highlighter and crosshatching for a shaded gradient effect.

Step by Step Instructions to Shade Notes with Grey Markers:

These step-by-step instructions are also available via this free one-page reference printable PDF below. It’s sized perfectly to tuck between the pages of your bullet journal for reference on how to shade elements on a page.

Here’s a step-by-step guide to learning to draw shade-able boxes and banners.

Add a box “behind” the strip of banner. Your banner is “in front” of the box, but without shading our eyes don’t recognize that third dimension.

Add a banner fold. This adds a 3-D perspective that is enhanced with shading.

Visualize where your light source is. I happen to always envision the light coming from the upper left corner of the page, keeping it consistent makes shading predictably easy.

Add shadows where perspective would show the sides if the box was three dimensional. – Notice how my use of the N0 marker behind the banner makes the banner appear to be sitting right on top of the box, but the N1 shading behind the box, which is a little darker, gives the impression that the box is floating with nothing behind it.

Color deep shadows, like the fold of a banner, with a darker grey, I use N2. A cool thing about Copic markers is that they can be layered with other alcohol based markers. Here I layer N2 and Y13 to create a deeply shaded yellow backside of a Y13 colored banner. 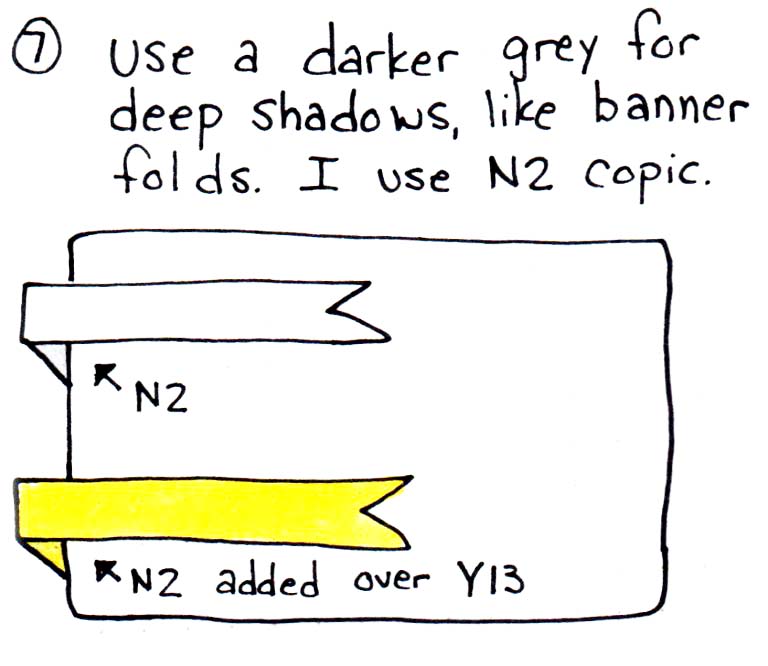 (Optional) If your shading feels like too much, or got a little darker than you’d like, you can use the colorless blender to smooth the effect. Be careful with the colorless blender, however, as it can sometimes “push” color into uncolored spaces (once you’ve used it a bit you’ll get the hang of controlling it)

That’s it! It may take some practice learning to convert perspective to shadows, but it’s an easy trick to add “wow” to your notes. Check out how a little shading around this banner really draws the eye to what’s important on the page, without any use of color:

Shading can be done with one marker (I’d recommend the N1 or the N2) but multiple shades of grey add depth, like in the image below:

How to: Create a Shaded Doodle Note Banner

In this post I’m going to demonstrate step by step how I create a banner with folds and shading. For step by step instructions slowed down and broken into bite size pieces- keep reading.

Frequently Asked Question: “How do you make doodle notes while keeping up with the teacher?”

When Curt Thompson said this quote at an event I attended in Seattle, I loved it and knew I wanted to visually emphasize it in my notes. Knowing that, I carefully spaced the words in well spaced lines, which would allow me to go back and embellish later. Here’s that first step:

For a banner, this starts with drawing a rectangle outline around each line of text. I like my doodle method because the irregularity of shapes becomes part of the style.

Normally after the banner is drawn I’ll jump to other elements of my notes and return to the details later. When I’m ready to detail, I usually use an N1 Copic Sketch Grey Marker to color the places where visually I want to make it appear that I’m seeing the “back” of the ribbon:

Over the entire thing (including the portion I just colored grey- Copics are designed to layer and blend) I add my color, in this case RV11 – Copic “Pink”.

Next, I use closely spaced black-inked lines to create even more depth- adding texture to the colored shading already added.

While I prefer grey Copic markers for grey shading, these illustration markers aren’t a great fit for a student budget. For a cheaper option, try the Zebra MildLiner in Grey (essentially, a grey highlighter available in singles from Amazon). Though it doesn’t blend, it works perfectly fine for creating basic drop-shadows. Experiment with this grey highlighter and crosshatching for a shaded gradient effect.

During the 2016 presidential election, my graduate school night class set out coloring book pages of the 50 states of the United States. Though a very kind gesture, I knew that to keep my mind occupied and not-too-anxious through the tension of the long evening, I needed something a little more consuming than filling in blank spaces with solid colors.

Instead of simply filling in the coloring book page with colored pencil, I used a fine point sharpie pen to create a unique texture or pattern within each state. In the final hour of class I used a set of blendable grey alcohol based grey markers to add depth and shading to my pencil textures. Using a black pen and grey highlighter markers to create this doodle of 50 states created depth and interest without color.

While I love my copics for grey marker shading, these professional illustration markers aren’t in every casual artist’s budget. The set linked above is a non-refillable alternative to grey markers made by copics that are priced for a student budget- but for an even cheaper option, try the grey highlighter made by zebra (essentially, a grey highlighter available in singles from Amazon). Though it doesn’t blend, it works fine for creating basic drop-shadows. Experiment with a single grey highlighter and crosshatching for a shaded gradient effect.

How to Really Color Mindfully

What is being sold as mindfulness is more often dissociation. Mindfulness is, by definition, a practice of intentional awareness to the body and surroundings, and attunement to what thoughts, feelings, and sensations are found there. Dissociation comes in many forms, but one form of dissociation is becoming lost in an automatic behavior or movement- allowing that behavior to dull our awareness of ourselves and our environment.

I hope to publish much more on this subject in months to come, but here are a few tips to make sure when you color you are getting the benefits of mindfulness:

1. When you color, only color.
If you are coloring while watching TV, listening to music, or otherwise have your attention split, you won’t be able to be present enough to mindful color.

2. Pay attention to coloring.
Ask yourself as you color: what do you notice? Notice smells, textures, colors, feelings, sounds, etc and sit with those sensations, notice them, enjoy them.

3. Invite Creativity
Filling blank spaces with color can be a difficult task to give your full attention to. Consider more complex patterns, like the ones shown here, which allow you to stay more engaged via creativity but establish boundaries to keep you from wandering too far.

4. Keep it Short
It’s difficult to do mindfulness well for long periods, especially at first. Instead, enjoy short 5-10 minutes of coloring in which you are attentive to the sensations and feelings around coloring in your mindfulness coloring book.

As I carefully penned the detailed pattern in black and white for each state, I found myself praying and mindfully moving through prayers for the state as I spent the 5 to 10 minutes per state carefully creating a texture. As someone who struggles with prayer in the traditional sense but has found it easier to meditate and pray with pen in hand, this didn’t surprise me- but I did appreciate how the structure of the task – filling each state with a tiny inked pattern- structured my prayer.