Ways Help Survivors After a Disaster: Tips from a Disaster Survivor

[I originally wrote this article in the summer of 2011, following the EF5 tornado that claimed 160 lives and 8,000 homes in Joplin MO. I’d used my professional experience in inventory management and distribution to help set up and manage the aid distribution for a relief center/shelter in Joplin and wanted to make note of what we discovered.]

The most eye-opening thing about my summer spent working in disaster relief was the realization of how often what someone intends to help actually has the opposite impact. I wrote this article in hopes that sharing what I learned about disaster relief and donations might help people know, in advance, how to effectively help disaster survivors the next time your school, church, or civic group rallies for donations for a disaster-stricken community.

1. KNOW WHAT NOT TO DONATE

Helpful, organized donations of appropriate supplies is most important in the days immediately following the disaster. Being able to find shoes that fit or cough syrup for a sick first responder is easier when the volunteers are able to locate well-labeled supplies, aren’t encumbered navigating around unneeded supplies, and are available to victims and first responders instead of occupied sorting and folding donated clothes.

Donations of goods were desperately needed and appreciated following the Joplin tornado, but hundreds of volunteer hours were wasted sorting donations of garage sale leftovers and half-used personal product. Similarly, thousands of volunteer hours are wasted after every disaster sorting shoes, clothing, linens, and begging- what disaster response professionals have called the secondary disaster. 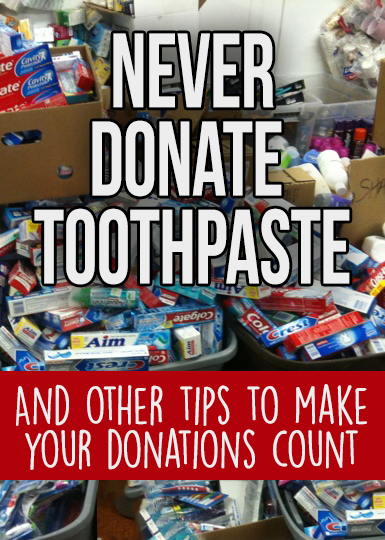 Relief centers are flooded with toiletries and used clothes after a disaster, but these items don’t help at all. Read on to find out about more effective donations.

GOOD DONATION IDEAS AFTER A DISASTER:

In the first wave of disaster response we discovered some unexpected critical needs, which (thought truckloads of donations arrived daily) we never had adequate supply on hand:

Eventually, much of the clothing was sold commercially to a company filling storage containers to ship overseas (an economic and moral crisis in it’s own standing). If I had to guess, I’d say less than 1% of clothing donated to disaster relief in Joplin actually went to replenishing what victims lost. (In fact, most survivors with renters insurance or a home owner’s policy received reimbursements to purchase an entire wardrobe)

The exception: when it’s okay to donate clothing to disaster relief:

Immediately after the storm, waiting for the insurance adjusters to arrive and assess, clothing did reach the people who needed it most. A clean change of clothes when you’ve lost everything and spent the day in the heat salvaging what you can of your belongings is a precious gift. One church, at that time, delivered to our building packaged sets of clothing, new or like new tops and bottoms, packaged with new socks and underwear, and clearly bundled in plastic bags and labeled. THOSE donations reached the people they were intended for.

Sizing, sorting, & folding clothing is such a time consuming task that in after a disaster many shelters and relief centers will absolutely turn away any vehicle trying to deliver a load that includes boxes of clothing. If you have a lot of clothing, consider instead having a garage sale at your home and donating the proceeds. Make sure shoppers know the proceeds will benefit the disaster survivors- and you’ll be amazed at the success of your sale! Involve your kids by letting them sell snacks or drinks. One young lady’s lemonade stand for Joplin raised nearly $500 in 2 days.

What about later? Donations 10 days to 10 weeks Post-Disaster: 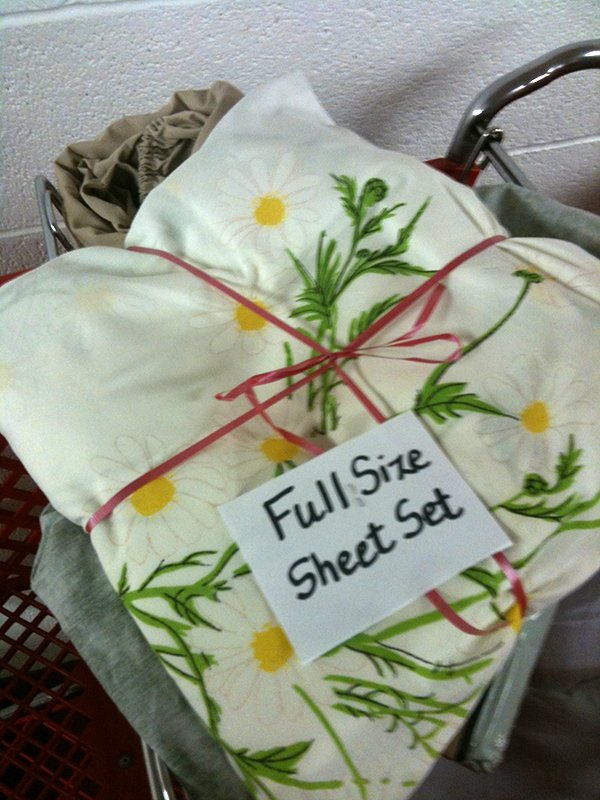 Bound, labeled, and laundered sheets ready to be given to a family in Joplin.

The list above mostly applies to needs in the first 14 days. After 2 weeks, focus shifts to long term support and rebuilding. Needs change to include:

Tools of any kind are used to rebuild and sometimes even replace someone’s livelihood. (from simple hammers & screwdrivers, to power washers and power tools)

Fresh, pantry items, canned, anything- Relief centers will serve hundreds of thousands of meals to victims and volunteers in the weeks following a storm, and Distribution Centers will try and help ease the cost of restocking a pantry for affected families below the poverty line.

clean, folded, and bagged or bound.

Bound, labeled, and laundered sheets ready to be given to a family in Joplin.

Spring is tornado season, and cleanup from a disastrous storm last into and through the summer- often made hotter by the complete loss of the area’s tree canopy. A donation of electrolytes keeps work crews safe and able to help.

A word about donating cash:

It’s okay to want to donate real, tangible items- but understand that every organization has expenses and those explode following a disaster. As much as our center was able to use willing hands and generous, well considered donations we also needed office supplies, gas to send trucks of food and water into the disaster area, money to pay the utilities that skyrocketed when the building went from being filled only Sunday morning to being at capacity 24/7, and other expenses we’d never considered. Cash was essential to be able to function helpfully in our community. If you want to donate towards something tangible ask an organization what they need and provide them the resources to meet that need.

One church, when we told them the toilets in our building were struggling to accommodate the number of people staying in the building at night, arranged for new toilets and a plumber to be there within 48 hours. Another group, after calling us and hearing the need, arranged for a nearby appliance store to deliver two freezers. One group, hearing we were having to turn people away, arrived with tools, wood, and mattresses to build rows of bunk beds in a room that previously held rows of cots.

Most of all, pray for survivors, their families, first responders, rescue workers, and for the relief workers. Pray your donation will meet an immediate need and bring some comfort to someone who is hurting. Pray for physical healing for those injured and a healing of the heart and mind for those who found themselves in a situation they never imagined and saw things the rest of us hope we’ll never have to see. 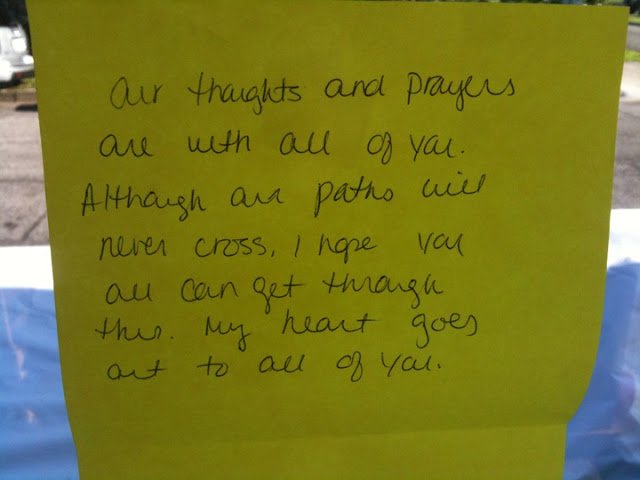 A simple note of encouragement can be a powerful donation and can be a way to help children cope with the disaster coverage they are seeing in the media.

2019 Update: I recently ran across the forms we created to use when we were talking with a victim about what supplies they needed, this conversation/interview was always done in a quiet, calm room with a mental health counselor when available. This was an intentional space to invite a lower level of stress/cortisol and allow the person to reach out or disclose symptoms which might indicate acute stress disorder (a normal response to a traumatic experience that has the potential to turn into PTSD if symptoms persist). The form was then sent into the warehouse of supplies and brought up by a volunteer. This Disaster Victim Assessment & Donation Needs Form can be downloaded below: 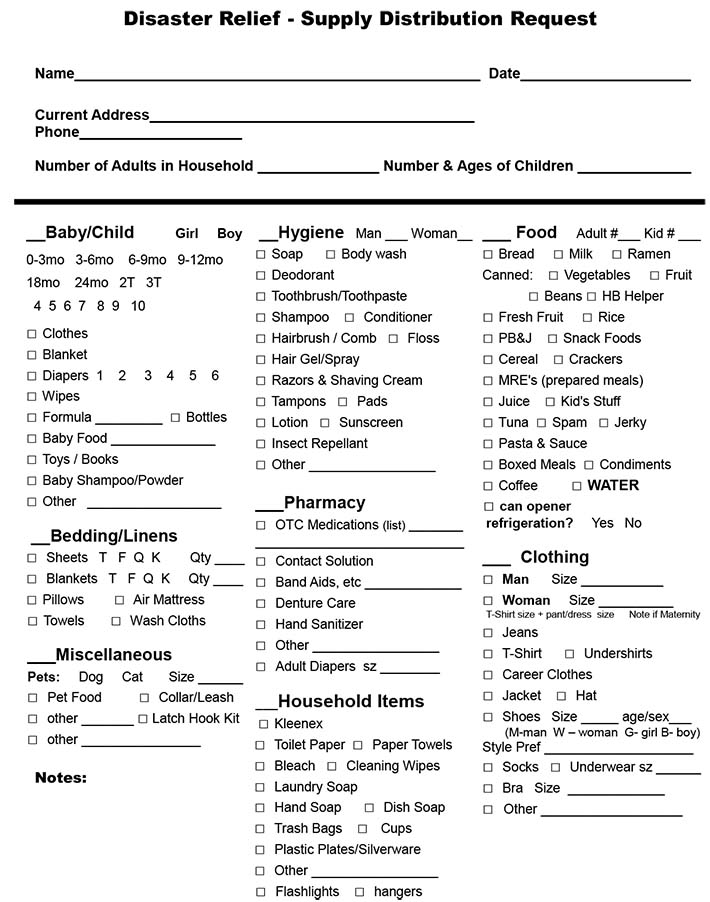 Lindsay, this is awesome! Thank you for writing this from your experience. It will help many people. Now we just need to get the word out. I will try and help

DIY: How I Made Easy to Clean Chicken Nesting Box Liners for my Laying Hens

Some of my tutorials call for specific products or art supplies, and when possible, I do the legwork to locate those parts for you.

To support this site, I participate in the Amazon Services LLC Associates Program, an affiliate advertising program designed to provide a means for sites to earn advertising fees by advertising and linking to products on Amazon.