How to Repurpose Wood from a Fallen Tree

Strong spring storms are not infrequent visitors to Hawk Hill. Living just 2 miles from where the infamous 2011 F5 tornado cut a swath of chaos through Joplin, and with a half-dozen or so tornado warnings in any given year, I’m used to storm cleanup. I am not used to the kind of damage caused at Hawk Hill by this year’s storm on June 5. Not expecting  a significant storm, I was at work in my store pulling product for that morning’s outgoing orders when strong winds kicked up, almost immediately cutting our power.  I was standing near the entrance, debating whether to stay put or to leave my umbrella behind and just sprint for the house, when a thunderously loud crash from just above me made my decision for me. Through the driving rain, I ran towards the house, horrified to see in my peripheral vision one of Hawk Hill’s century-old oaks laying sideways, the top quarter resting on the roof of my shop. 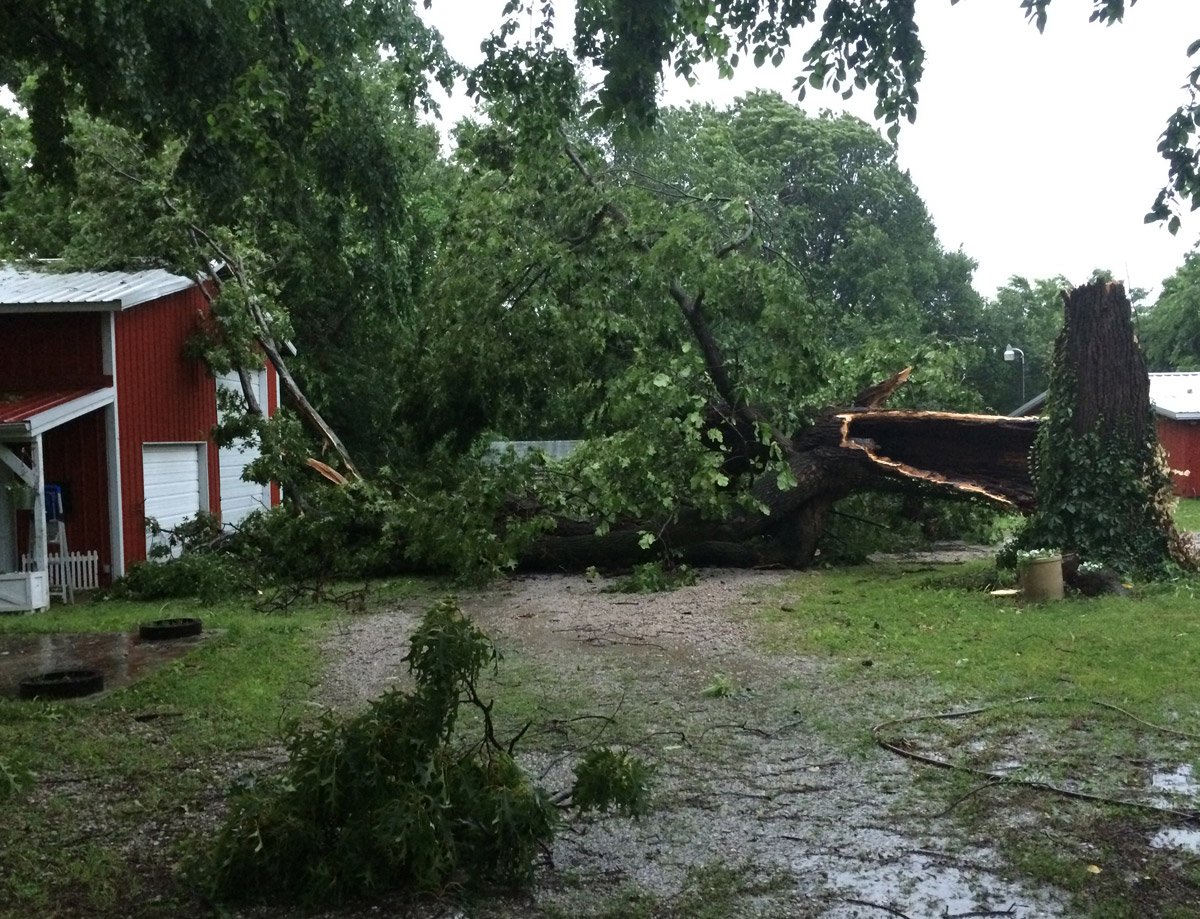 When the rain let up and the clouds cleared, I took a closer look at the fallen sentry. Witness to Hawk Hill since well before it’s construction, the old oak had rotted, imperceptibly from the outside and even to my arborist. Though still a stately focal point at the center of the back circle drive with branches that shaded the farmyard, the center had slowly rotted away until the old tree was felled by a strong summer storm. 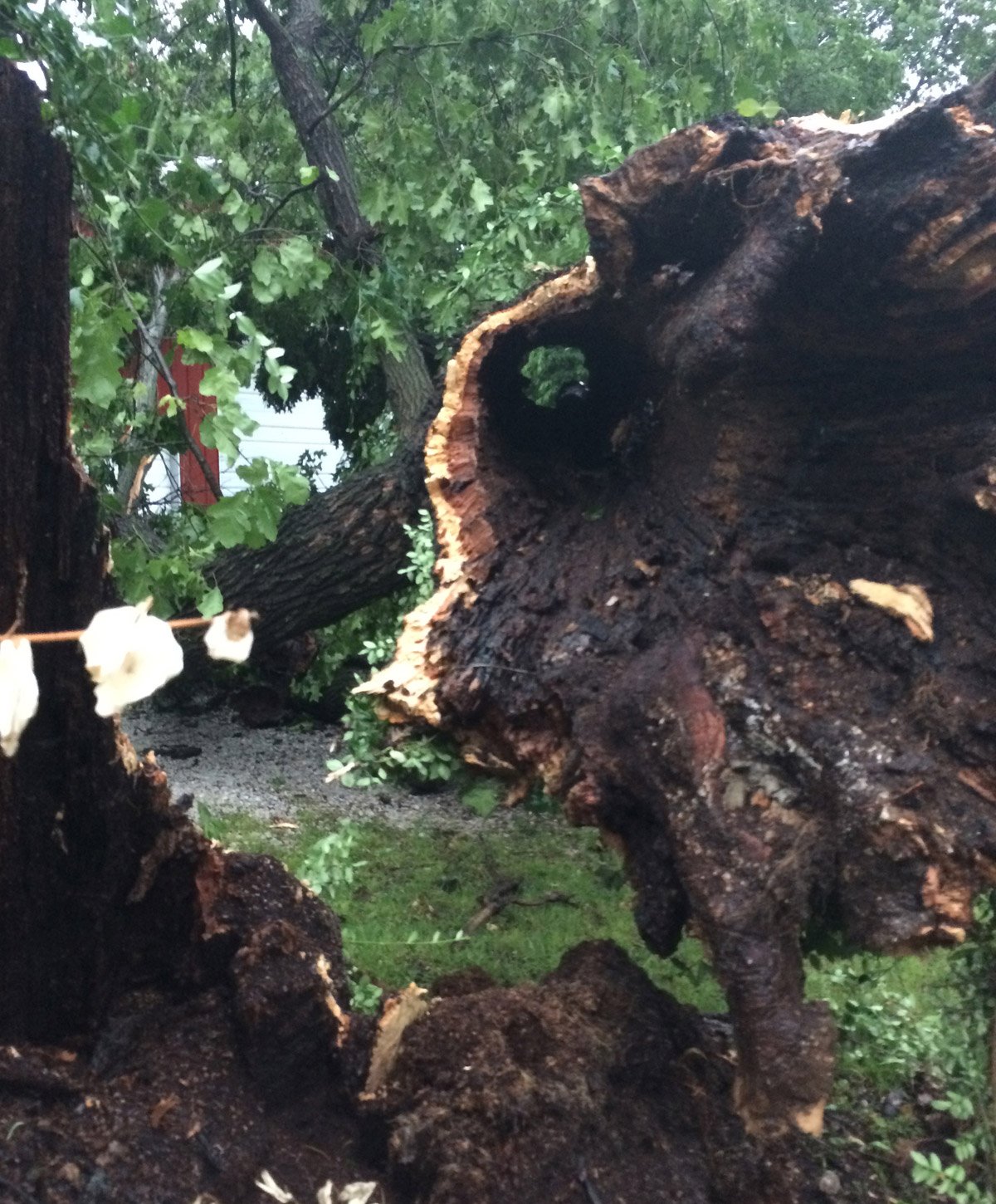 Is it strange that it almost make me feel better to know the tree was hollow? To know it was just a matter of time sits with me better than thinking it was felled by a freak storm in the prime of it’s life! 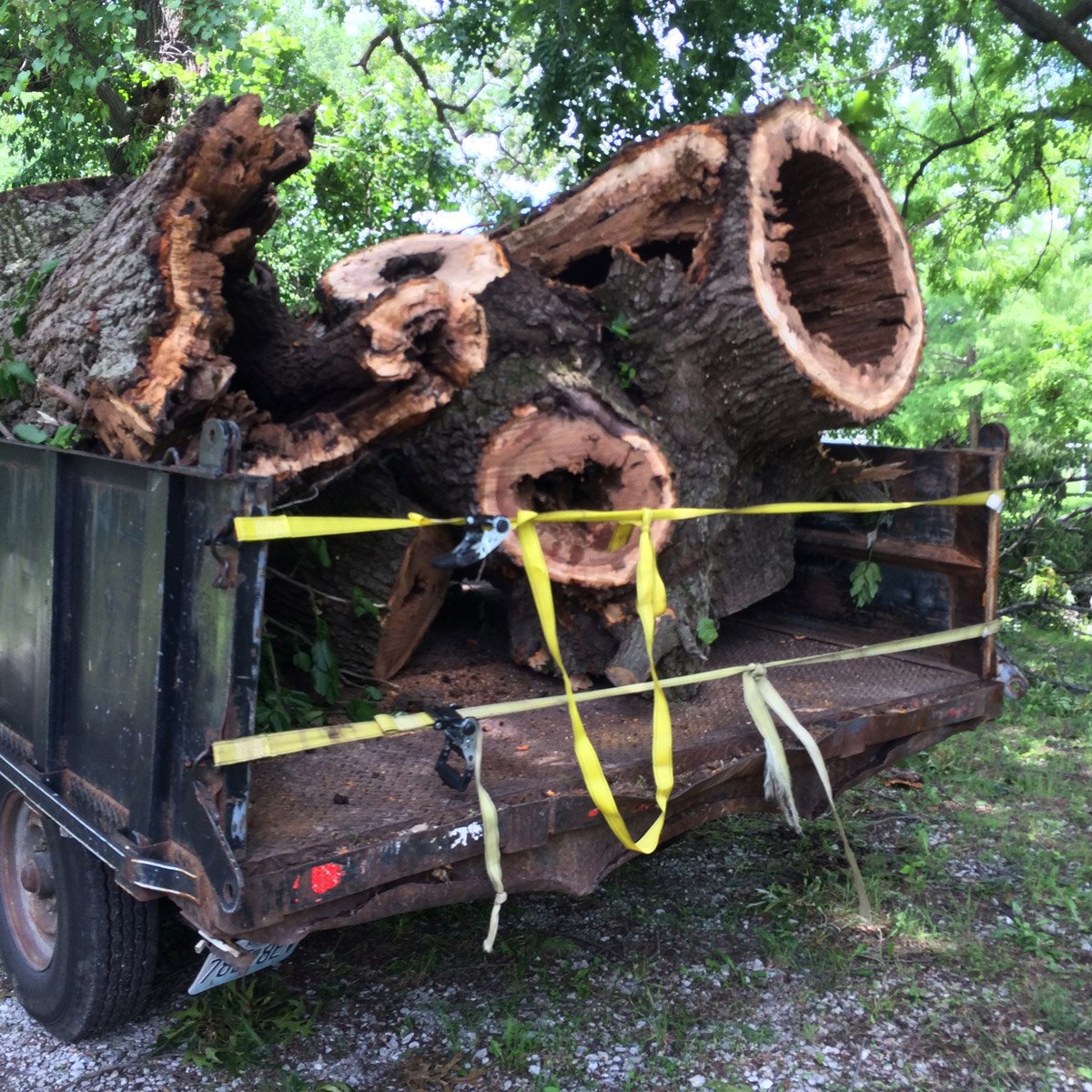 I regret not having some of these hollow logs chopped into sections for use as planters.

I’d be lying if I didn’t admit it’s been an emotional loss as well. I’ve grieved that tree in a way very similar to losing a friend or a pet. Likely making it worse, is that the rain in the forecast every day since then means that the broken and dying tree lay on the ground for more than a week, making me mourn each time I stepped out the back door.

My wheels have been turning, busily trying to come up with projects to use the wood. The only thing better than DIY is DIY using materials that have sentimental value, so in a way I’m glad I had had time to surf the internet for reclaimed wood / fallen limb projects before the tree trimmers came to remove the tree. 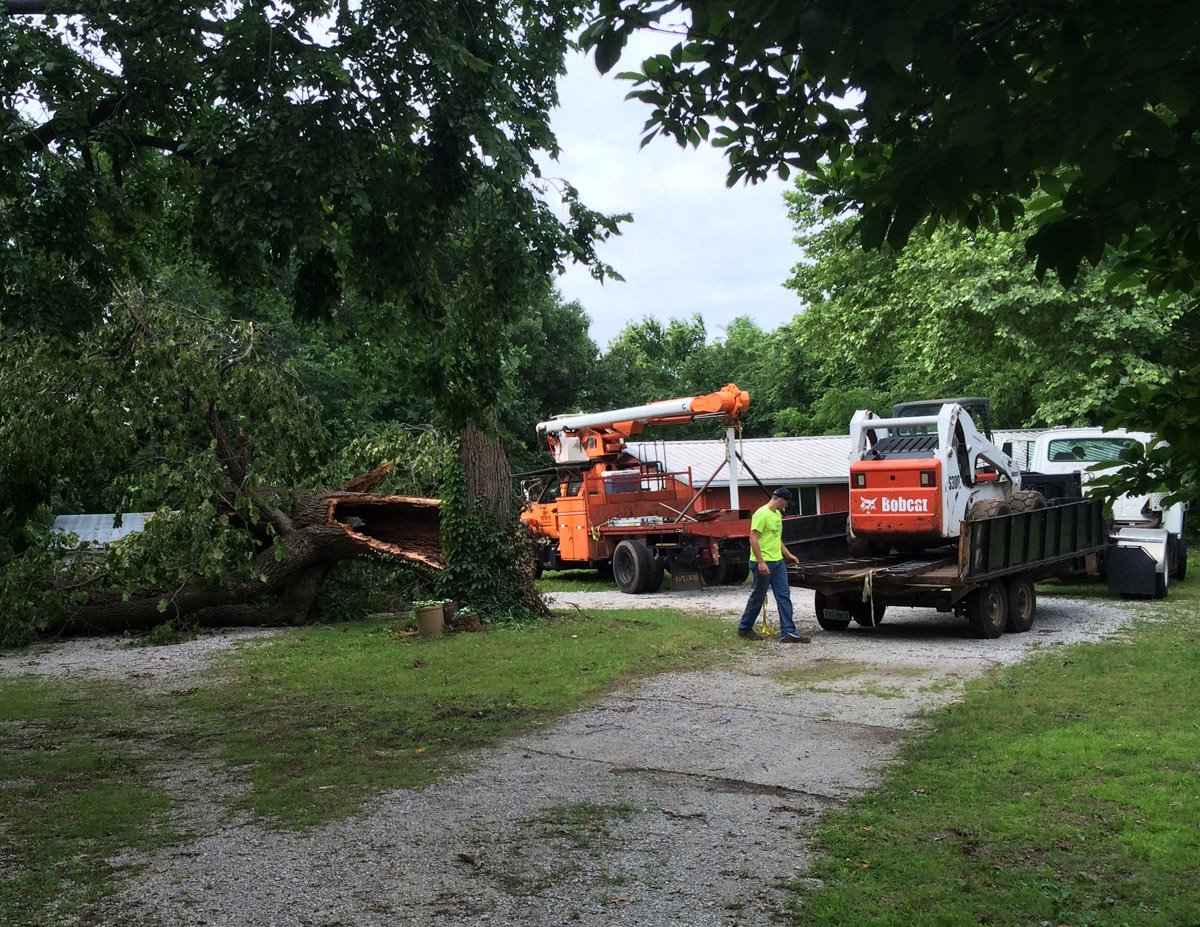 Tree trimming crew unloading in the AM 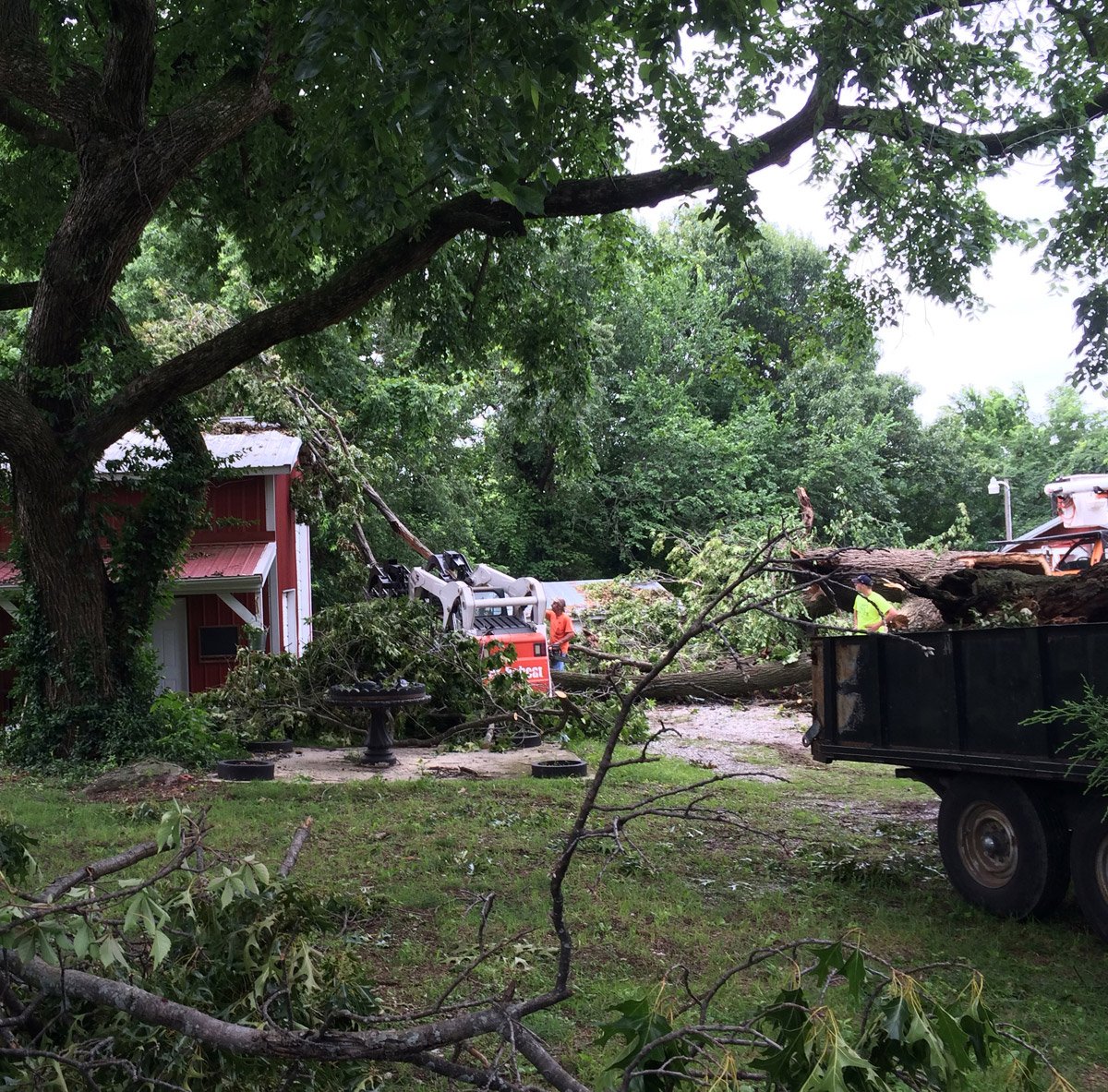 lifting branches off the building.

lunchtime of Day 1 of storm cleanup. 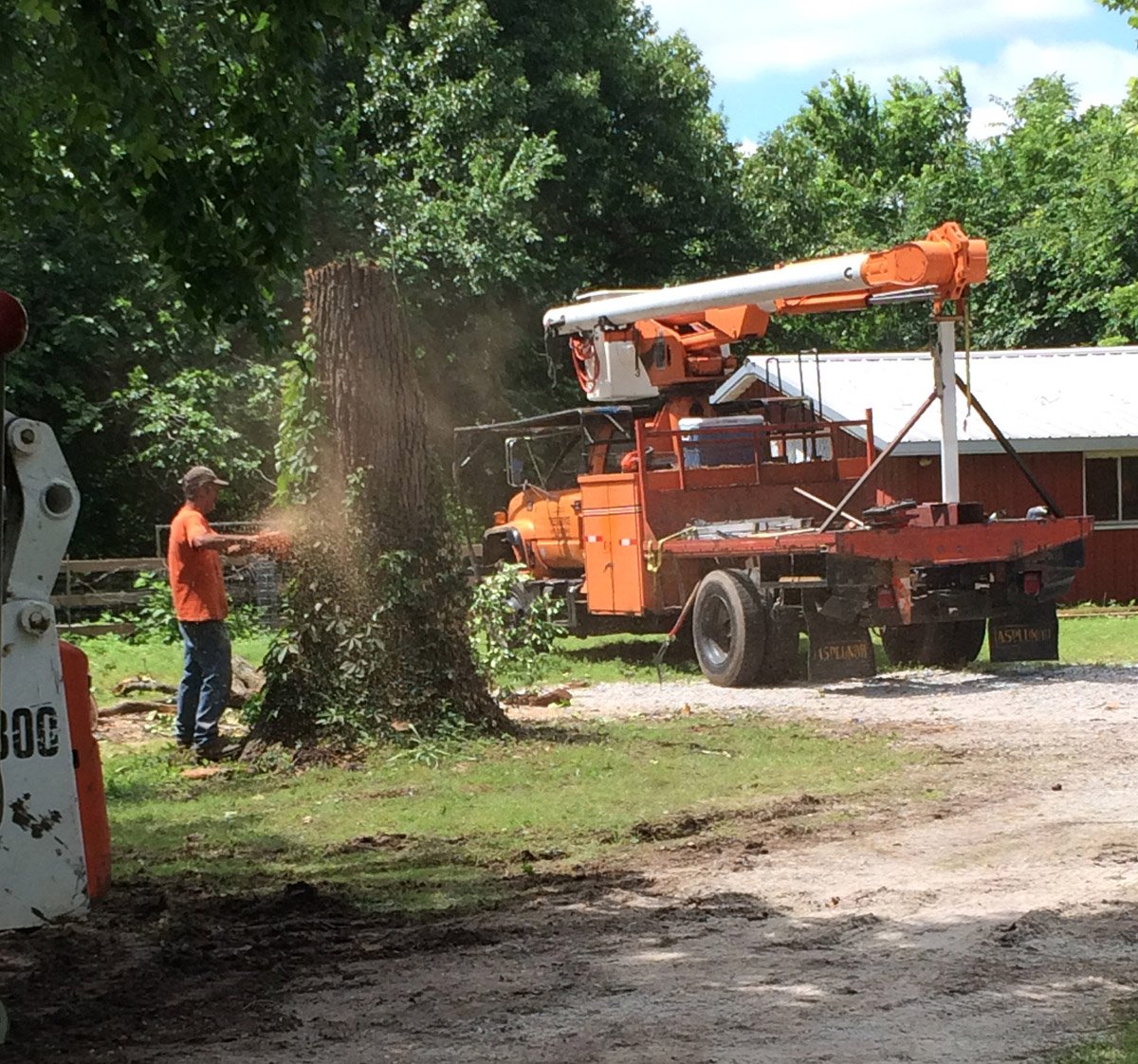 This photo makes me so sad! I thought this central and ancient tree would stand at Hawk Hill for forever. 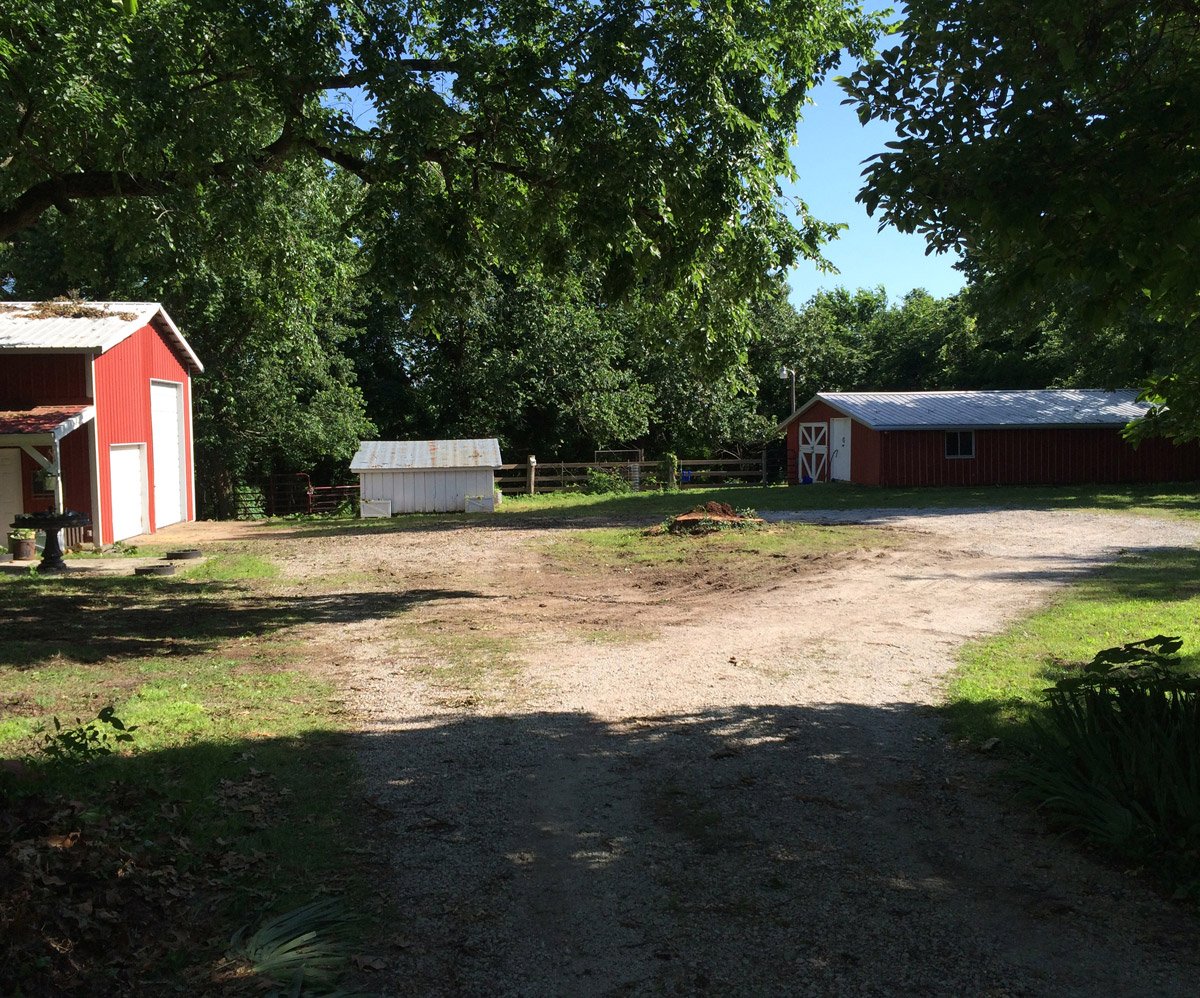 Evening of Day 1. Only a short stump left to grind. 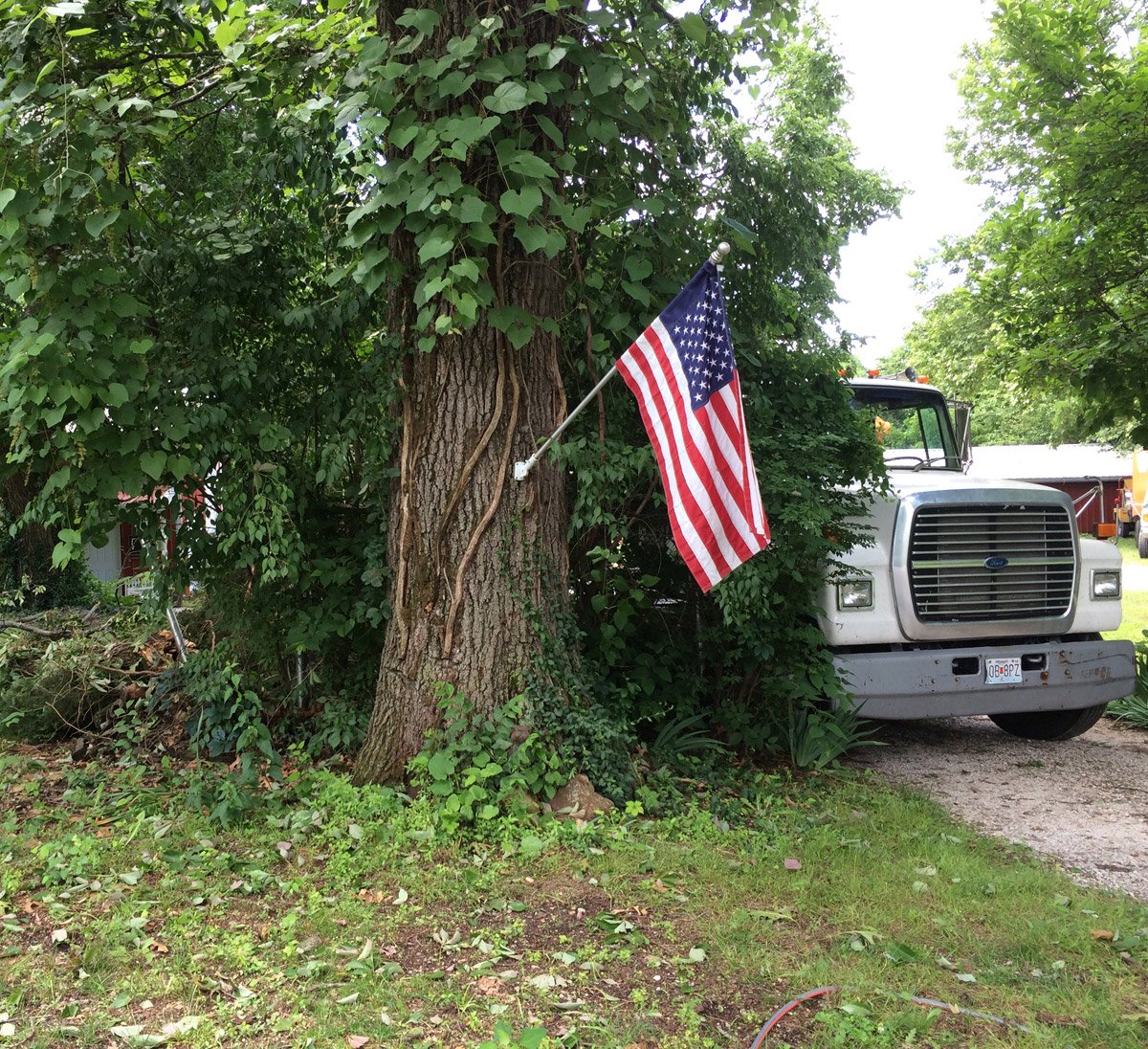 While I had access to men and a bobcat, I had the tree trimming crew remove all the brush from around and behind this old oak. Though not nearly as large or as stately as his neighbor, clearing the brush around it makes it look larger and more, for lack of a better word, elegant. 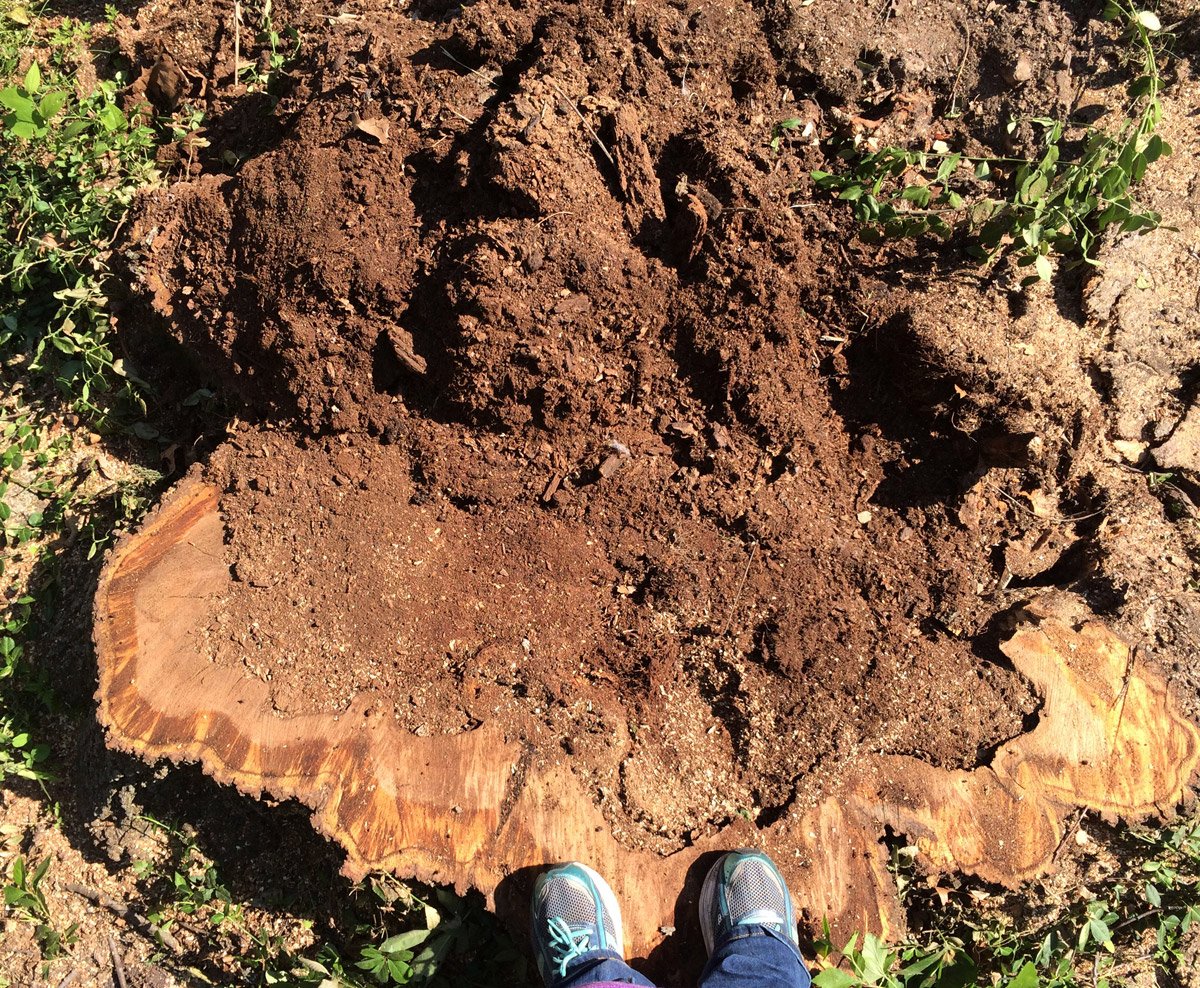 When the tree fell it pulled half of the trunk up at below ground level- but this is me standing on portion of the remaining stump.

Clean and Descale a Shower Head with Citric Acid
← Previous
How I Convince a Broody Hen to Adopt Hatchery Chicks
Next →
Click here to cancel reply.
Follow for More:

DIY: How I Made Easy to Clean Chicken Nesting Box Liners for my Laying Hens

Some of my tutorials call for specific products or art supplies, and when possible, I do the legwork to locate those parts for you.

To support this site, I participate in the Amazon Services LLC Associates Program, an affiliate advertising program designed to provide a means for sites to earn advertising fees by advertising and linking to products on Amazon.