Ideas and Tips For Taking Creative Notes in Class 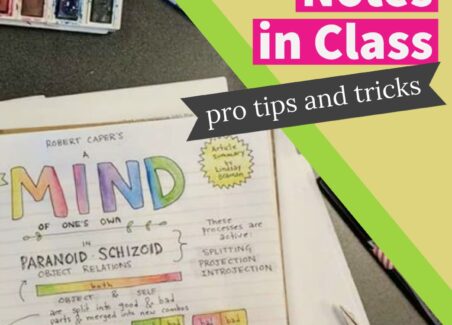 Almost all good speakers- whether professional speaker or classroom instructor- structure their presentation similarly, moving seamlessly, between information and illustrations. They use stories as examples to capture our imaginations and weave them within periods of information presentation. This rhythm of speaking is the space in which beautiful notes have the space to grow. 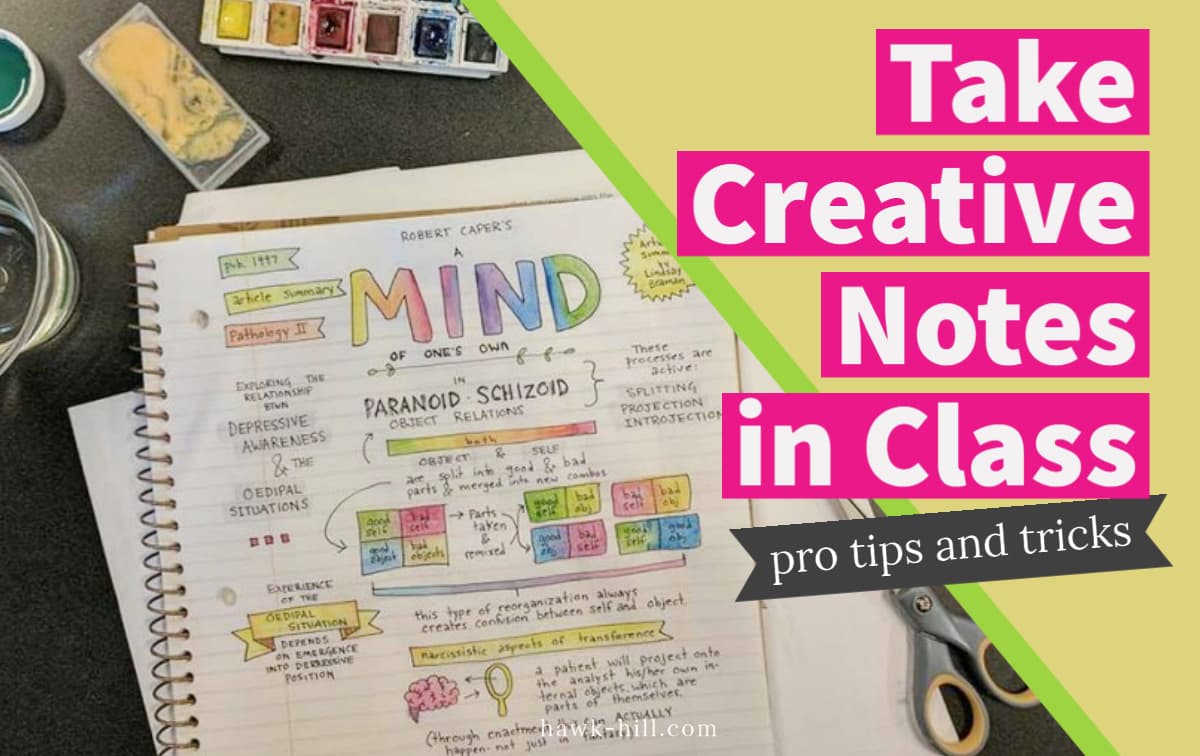 One of the most frequently asked questions about my sketchnotes is “How do you have time to make those while a speaker is presenting?” Frequently in a room where others are scrawling longhand notes, I’m writing, lettering, illustrating, coloring, and shading my version of the record.

There are two tricks to taking beautiful notes during a speaker’s presentation or for students, during a teacher’s lecture in school during class:

In my first weeks of graduate school, I began to panic as I realized that, even taking longhand notes, I wasn’t able to capture all the information being presented in class. In sharing this concern, a kind professor told me that everything I needed to know, really needed, would circle back around during the 3 year program, and he encouraged me to have the grace to let things go on the first pass. That advice was important and timely, as I began to relax in the classroom and trust the process.

I learned to grab what sticks out to me in a lecture- the main points, the best examples, the evocative quotes – and let the rest pass with trust that it will return to me if needed.

An interesting thing about sketchnotes, though, is that because I’ve creatively and visually engaged the lecture, I can often fill in the blanks between doodled elements, because of the visual clues. 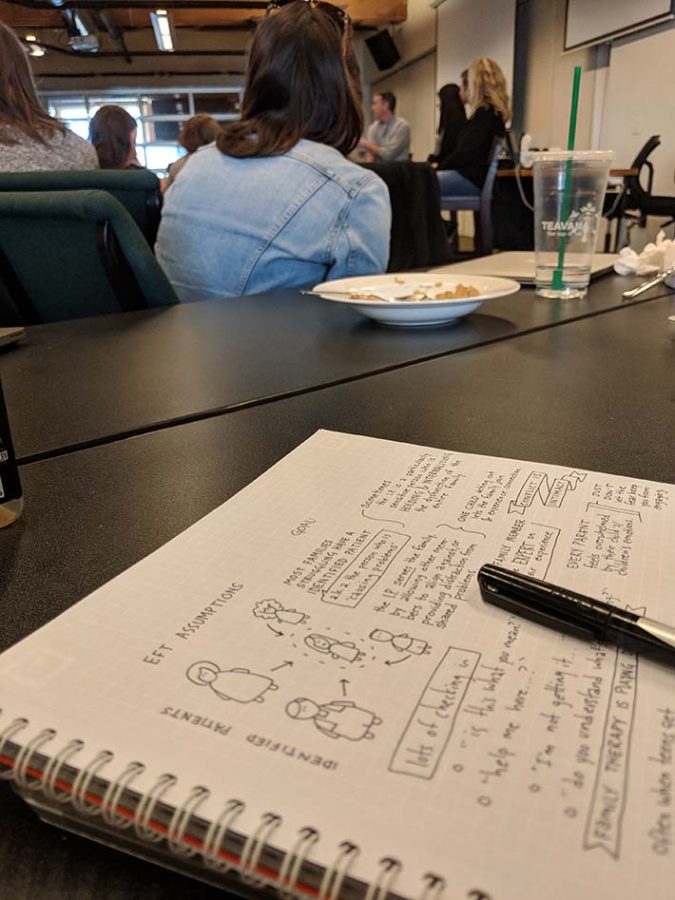 2. Use the Speaker’s Rhythm

More practically, my best advice for creating beautiful notes during class is to learn to use the rhythm of story/example/instruction that many speakers use to create space for play, via doodles, color, and shading.

For example, when a presenter or teacher is lecturing on vital content, I’m taking notes rapidly with words widely spaced. However when a speaker moves into story- or begins answering student questions- I’m using that time when most people put their pens down to embellish the text I’ve just written.

Here’s an example, the image below was taken about 5 minutes into a lecture. I’ve located what will be my header lettering, and begun following the professors words. I hear the quote “Experience without theory is blind” and think: Banner! With the end result of a banner in mind, I copy the quote in short lines with deep line spacing and continue tracking with the data the professor is presenting:

In this next photo, taken perhaps 20 minutes later, you can see that I’ve continued creating content-based text from the lecture, but also found time- likely during a period of questions or a clinical illustration- to return to my previously unfinished header and banner quote and add inked borders and lines. 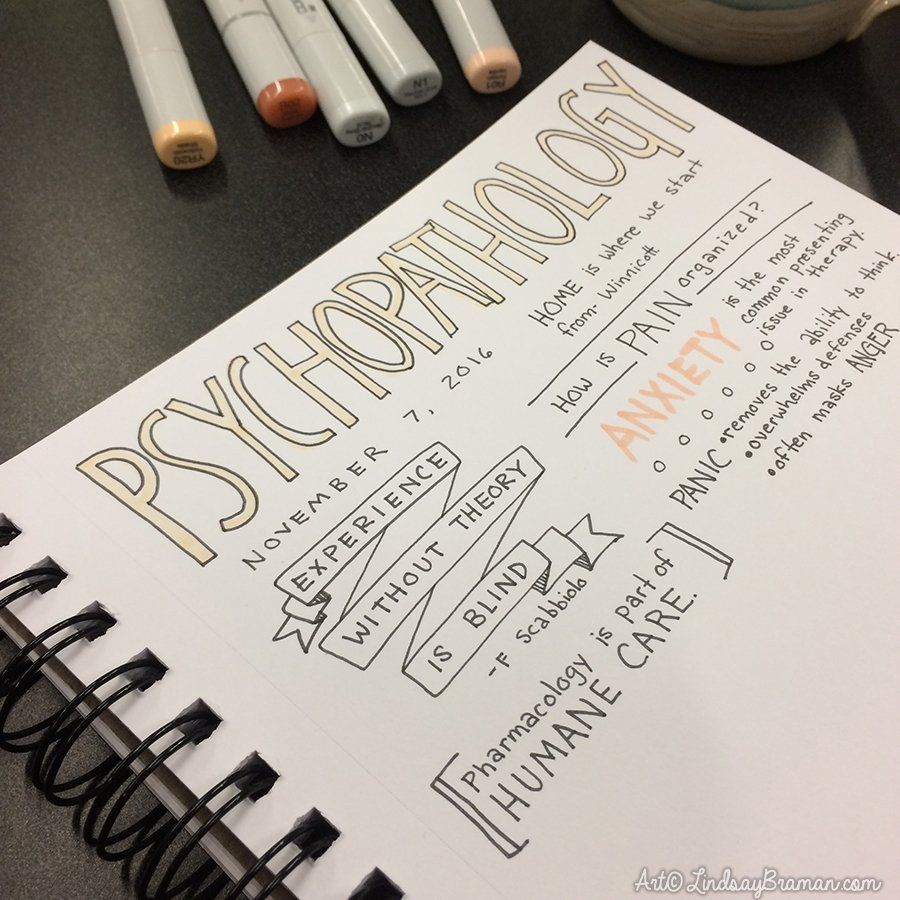 This final picture, taken of this page of doodle notes at the end of the course, shows how text content continued in this way, interspersed with graphic embellishment via shading, colorfill, and in this case: ombre shading in the header.

My most common problems creating doodle notes live during classes isn’t finding the time to embellish my notes, or even locating the creativity to create a layout in the moment without planning ahead- it’s actually confronting my own fear as I sit down with an empty page!

Even though I make these notes for myself, I find myself struggling with expectations and insecurities each time I begin. My advice to myself- which is also my advice to you, my reader- is to approach each class period’s notes as an experiment. Some things will work, some things won’t work, but choosing to enter creative class notes is a choice to learn visually and to practice over and over again- and what I’ve learned, and what I assure anyone trying this out- is that entering creative practice with a willingness to try new things, make mistakes, but keep doing it over and over and over will produce work you are proud of and that helps you learn in the long run.