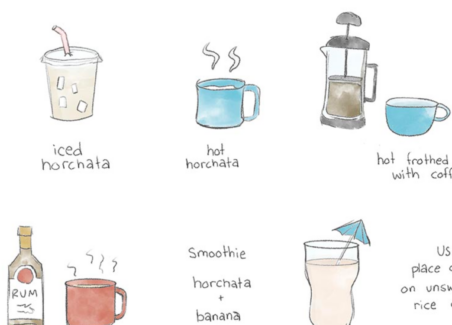 Recently I have been on a horchata latte kick, and here’s my doodle to prove it. I’ve taken a little time off from “professional illustrating” but this little horchata latte doodle – plus all the other ways I enjoy horchata- is an example of my creative cavorting during my recent hiatus. Read on for recipes!

Horchata can be made from scratch using basic ingredients (rice and cinnamon and vanilla) but on a recent post-therapy Amazon shopping binge I picked up a bag of powdered horchata mix. When the 3-pound bag arrived, I was a little taken aback. What on earth would I do with this much horchata?

Below are six of my favorite ways I have discovered to enjoy horchata.

The instructions for the horchata mix linked above calls for water OR milk, I make a half-gallon at a time and instead of using all milk or all water, I use 50/50 combination of milk and water. The 50/50 mix still froths well in a milk frother, but I’ve not had luck making foamy horchata lattes  with a lower milk to water ratio than 50:50.

Horchata is typically served cold over ice. This classic presentation is a refreshing drink for a warm day (blend the ice and horchata together for an icy frappe!)

In Seattle, we’re known for our coffee houses, but even as a now semi–long-term resident, I’m not always in the mood for coffee. My most recent horchata experiments were kicked off by an experience in a coffee shop in the Greenwood neighborhood of Seattle, when I ordered horchata and was asked I wanted it hot or cold. Surprised by the question (and curious!) I said hot and was treated to a delightfully cozy beverage that reminded me of a cross between a hot chocolate and an espresso-less breve.  Hot horchata makes a great replacement for an espresso-based drink if you’re trying to cut back on caffeine. 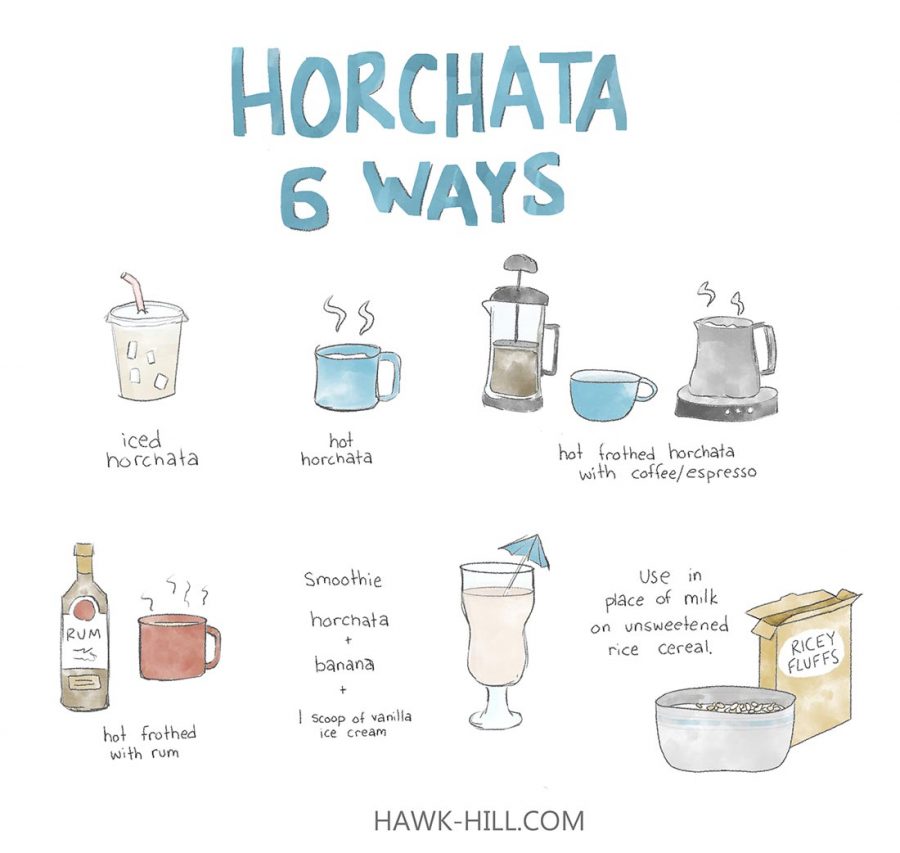 Recently I have been on a horchata latte kick, and here's my doodle to prove it. I've taken a little time off from "professional illustrating" but this little horchata latte doodle - plus all the other ways I enjoy horchata- is an example of my creative cavorting during my recent hiatus. Read on for recipes!

Recipe Instructions: Prepare 1 shot of espresso using a espresso maker or moka pot, warm and froth 1 serving (6 ounces) of horchata. Pour expresso into a 8 oz glass and, while stirring, pour the frothed horchata into expresso to combine.

On the same ill-fated online shopping trip that brought the 3-pound bag of horchata to my doorstep, I bought a latte milk frother. Per my disclosure below, I’m not paid to promote any products, but I do include affiliate links to products I use and love, like this Milk Frother & Steamer ) which literally was a key to my survival during COVID-19 quarantine.

I’ve been seriously trying to reduce my dependence on coffee shop espresso drinks and improve my own coffee making abilities- and I was very glad for that practice when the pandemic arrested my coffe-buying habit suddenly. Paired with a Moka pot (which makes a sort of cross between drip coffee and espresso, using a stovetop burner) this little milk frother has made it possible to make a perfect horchata latte at home- at least, perfect to my taste. It’s also cut my coffee-creamer habit out completely, since the milk frother uses 2% milk to make a creamy horchata latte foam that’s way more satisfying than any prepared creamer.

One day when I ran out of milk but had a half-gallon of prepared horchata leftover from a party the night before, I decided to see what would happen if I put horchata in my milk frother. The result: serendipity. Espresso served with frothed horchata as a horchata latte can rival any coffeehouse drink in my opinion, and tastes exactly like Seattle institution Moore Coffee’s horchata latte.

With a 3-pound bag of mix to use up, horchata became my go-to for parties and gatherings. A couple scoops into an empty milk jug, filled halfway with water, topped off with 2% milk, then shaken and chilled made for a super easy contribution to potlucks.

One evening as I packed up this drink to take to a movie night with friends I decided to also take my frother so everybody could experience my newly discovered delight in hot frothed horchata. I can’t take credit for this next part, but the host of the party pulled out a bottle of coconut rum that was perfect for turning this kid-friendly drink into a delicious winter cocktail. Spiked hot horchata is a little bit like a Mexican take on a hot buttered rum cocktail.

One morning I stumbled into the kitchen, poured myself a bowl of rice cereal, and reached into the refrigerator for a jug of milk – I didn’t realize until I had a spoonful of cereal in my mouth that I’d dumped horchata, not milk, on my cereal and… I liked it!

Horchata can make a boring bowl of plain cereal very fun! Kids especially get a kick out of cereal that looks plain but has a burst of flavor from the milk.

Finally, a horchata smoothie is a cool and creamy way to enjoy this drink as a dessert. Just blend some horchata with a banana and a scoop of vanilla ice cream for a summertime treat to rival a milkshake