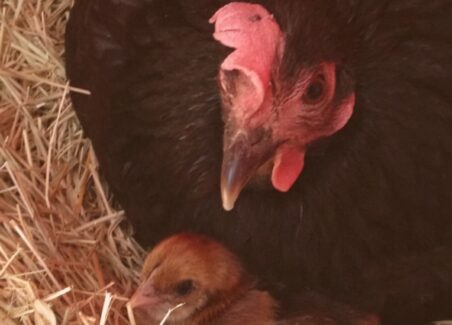 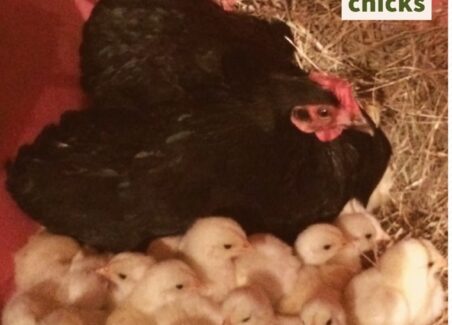 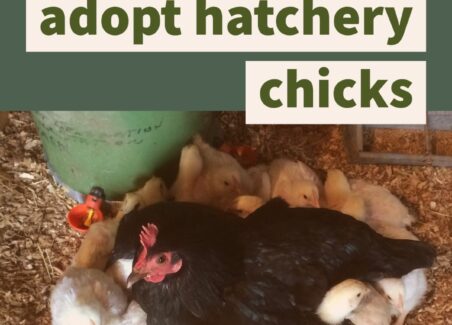 If you’ve ever fussed with heat lamps, cold drafts, warm days risking overheating, and tiny baby chicks in a brooder, you know how frustrating the brooding process can be. Finding a hen to adopt your chicks and do the temperature regulation for you becomes a tempting idea.

When one of my hens became broody about 10 days before my hatchery order of Cornish Crosses was ready to pick up, I was ready to take on this adventure! I moved my hen to a new nest in a brooder and let her settle for 48 hours before I picked up my chicks. (I’m lucky to have a hatchery nearby!)

When my chicks came home, I settled them in a temporary brooder (a rubber made tub) in my garage and waited until about 11pm to attempt any transfer.

In the middle of the night, well after my broody hen was settled for the night, I put a few chicks in my pocket, donned a red-light headlamp and quietly entered the stable and opened the hen’s cage. quietly and quickly I covered her head with a thick handtowel, to keep her quiet and in the dark and to prevent pecking, and carefully slipped the tiny day old chicks underneath her.

Although I had over two dozen chicks, wanted to test my broody hen’s willingness to adopt pre-hatched chicks with just a few chicks just in case she rejected or mistreated the chicks implanted into her nest.

When I entered the stable the next morning, I could tell from the contented conversation coming from the nest that implantation had been successful. Upon investigation, all the chicks were tucked cozily underneath the hen and adoption was a success!

Over the next two nights I added a few chicks each evening and removed a few eggs, each time cover the hen with a towel and depositing the new chicks in the back of the nest. (My hen nests in medium tub-trug buckets turned on their side, so placing chicks in the back guarantees they can’t wander away)

By and large, this experience of encouraging my broody hen to attach to hatchery chicks was wildly successful, however, there were some early losses. I attempted to get my hen to adopt 33 chicks and lost 3 the first week. While I wasn’t able to troubleshoot causes individually, it appeared that they were suffocated or accidentally stepped on by the broody hen. After the loss of the third, on day 4, I simultaneously removed the bucket from the nest (to increase air flow from all sides and hopefully prevent suffocation) and added a heat lamp in another area of the nest, so the chicks might not be so inclined to squash so tightly together around the hen. One or both of these efforts were successful, and no more chicks were lost until week 4 when the genetic frailty of Cornish Crosses began to surface.

Setting up your Brooding Hen to Adopt Hatchery Chicks

To set up your chicken coop for success, you’ll need three things: nesting materials, a cage, and the cover of darkness.

The nesting materials in your brooder can be anything from straw to hay to shredded paper. Generally, wood shavings are the most popular. Generally, chicken coop cages can be made from chicken wire or any other type of wire that will keep the chickens in and predators out. For getting a broody hen to adopt live chicks, though, you’ll need a much smaller cage. A dog crate for a small or medium dog works well. Finally, you’ll need to work under the cover of darkness. This is important because it will help keep the broody chicken calm, relaxed, and sleepy. If she wakes up on live chicks, she’ll think they are her eggs, hatched!

What fun pictures! I actually just got my barely 1 year old broody hen to adopt a few of her older chicks we hatched in the incubator before she went broody. It's been very successful and amazing to watch her being a mother.

Very informative! Thanks so much I learned a lot from this!!

I love your story. I tried that twice. Once with success, one with failure. The success was the hen’s eggs started hatching. I went to the store and bought the chicks I wanted and incorporated them with hers as she was hatching eggs. She raised them all with no problem. Failure was hen setting on infertile eggs. I let her set awhile and then started placing chicks. That did not work. She wanted no part of them. I like your idea of putting a covering over her eyes.