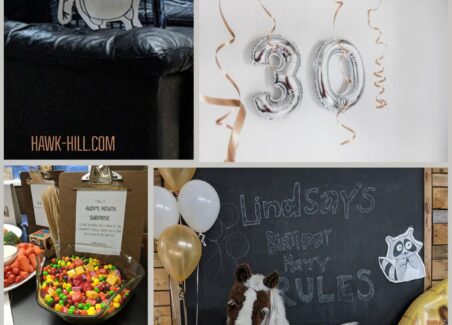 It’s a little bit of a vulnerable thing to throw yourself a birthday party, let alone a big Parks and Recreation themed birthday party. I turned 36 this year, and with my birthday arriving at the end of a year that held both significant loss and much growth, I was ready to celebrate big. Most years, insecurity has kept my celebrations small, but this year I felt ready to have a big party and when a good friend with a passion for event prep offered to come along for the ride, I decided to go all-in!

Parks and recreation has been off the air for a few years, but still lives on as a pop-culture icon. Parks and Recreation is still one of my favorite shows and I have not stopped loving it at all since it went off the air. Having a Parks and Rec themed party was surprisingly perfect for adults, it was a playful way to theme an adult party.

My friend group shares an affinity for Parks and Rec, and we are constantly making references to the show. I picked a costume party after realizing just how much introverts love a costume party- and after exploring a lot of ideas for costume party themes for adults. The freedom to dip in and out of character seems to give introverts a chance to hide in plain sight.

My invite to my Parks and Recreation themed party included the invitation to come in costume and in character. Everyone had a lot of fun playing the part of their chosen role- especially since Parks and Rec has such great characters that personify the alter-egos of many people!

My Parks and Recreation themed birthday party included themed-menu snacks, amazing decorations, and even a parks and rec game/activity for my grown-up guests. I thought I’d share a little bit about our decorations, menu, signs, and props in case anyone out there is still a diehard fan of parks and rec trying to host their own themed event.

food signs were displayed on the buffet table using vintage clipboards (for a truly parks-department vibe) and the transparent sleeve on the front of a binder (binders being, of course, classic parks and rec reference)

Calzones (aka Pizza Rolls)– Ben Wyatt’s favorite food, calzones, were a natural choice for this themed party, but who’s got time to make calzones!? In a burst of inspiration, my party planning friends suggested we sub pizza rolls for calzones and it was a perfect party pairing.

Also on the menu: BACON, Chicken Strips, Waffles, and Veggies.

Eggos and Frozen Chicken Strips made a “chicken and waffles” option easy.

Pawnee Indiana is overrun by raccoons. In keeping with this theme, we filled the venue with raccoons. An artist friends came over the night before and drew 2 foot tall raccoons on posterboard which we then pasted around the building, but you could do the same thing with pictures or even stuffed animals – just make sure the raccoons don’t run you out of your party like they ran Leslie Knope’s mother out of the Pawnee hospital when she was going into labor with Leslie.

it just isn’t Pawnee without little Sebastian, and during our party planning sessions we dreamed of lots of different ways to have a version of Lil’ Sebastian present- even checking into getting a live miniature horse to show up! But a few days before the party when we went to a thrift store to try and score some party supplies, we found the perfect little Sebastian: A FurReal animatronic horse.

Initially, at the store, where the giant stuffed horse was priced only $12, it appeared to just be a large stuffed horse- it wasn’t until later that we realized all it needed was a package of new batteries to come back to life! It was the perfect Pawnee Indiana party decor, and it spent the entire party flicking its tail, tossing his head, whinnying, and following conversations with its head and ears. This used giant fake horse was maybe more popular than me, the birthday girl, at the party.

As a nod to April and Andy’s plate-less kitchen, we subbed frisbees for party plates. Frisbees were more expensive than I expected online, but at a nearby thiftstore we were able to score a dozen for under $10. After a trip through the dishwasher and paired with cheap paper plates, these made fun themed plates for the party.

When you think of Parks and Recreation waffles are a no-brainer. In a stroke of luck, my December birthday coincides with the exact time of year that retailers panic about keeping summer inflatables in stock. I was able to score this 5-foot wide inflatable waffle on clearance on eBay a few weeks before the party, and he made the perfect hiding spot for the cutest of Pawnee’s raccoons.

Additional decor was provided via balloons and some printable signs I made in advance. The signs were super easy to make and I’ve provided a couple of PDF versions of my posters as a free download below.

For frames, rather than purchasing new ones I just visited a large thrift store, where black thin-rimmed frames can easily be scored for about one dollar each – cheap when it comes to party decor!

Free Downloadable PDF Sign: Sometimes you gotta work a little so you can ball a lot – Tom Havorford

Club_Swanson (not my sign, and I’ve lost the source if it’s yours PLEASE let me know)

SIGN: there is nothing we can’t do if we work hard, never sleep, and shirk all other responsibilities in our lives. – Leslie Knope

Frankly, once little Sebastian was in place I was convinced the party was perfect. But when a friend arrived a few minutes later bearing a homemade DJ Roomba the party was really complete. Paired with a Parks and Rec themed Spotify playlist, it was the perfect finishing touch.

for the sake of authenticity w, actually looked into posting this party at one of Seattle’s community centers or a library, but it turns out any of these public spaces are free require that the events be open to the public. When my friend offered a room at her church I was initially skeptical, however the community room turned out to be the perfect venue. A bulletin board covered with signs posted on how to apply for a job if you’ve been convicted of a felony, and flyers about hepatitis A symptoms posted around the room actually made for an ironic and totally appropriate backdrop (I did add my own “Pawnee’s most wanted pests” sign to one of the bulletin boards)

Picking my costume was hard, I definitely channel Leslie Knope opted in my excitement about projects and intensity about and for the people and things I care about, but it was also very important for me to be ME at my party. After a little bit of thought, I decided to be a “Pawnee goddess” the feminist Scout group headed by Leslie Knope on the show. With a purple vest from Amazon, a little bit of rick rack, and a few patches I sourced from the craft store (and one Pawnee goddess pouch I found online) I made a perfect version of the Pawnee goddess uniform.

For the most part, my Parks and Recreation party flowed like a typical adult get-together, with one special edition: contests and prizes! In true Leslie Knope fashion, I challenged my partygoers to form teams, and with their team to collage birthday card for me in five minutes or less. The winning team, I promised, would win prizes…

Ultimately (of course) I named no winner, however, conducting the contest was a delight! It also gave me an excuse to exercise one of my favorite ways that Leslie Knope and I are similar: giving presents.

Before the party I’d been collecting small gifts, and had enough to gift small tokens to everyone- but it was particularly fun to be able to give specific, thoughtful gifts to those who worked so hard to make my Parks and Recreation themed birthday party special.

I hope this post has been helpful for planning your own Parks and Recreation themed birthday party. In the end, we brain stormed many ideas we weren’t able to implement at the party, so I’m including a list of even more ideas below:

This is the cutest thing I've ever seen. Throwing one for a friend of mine and stealing all of your ideas lol.