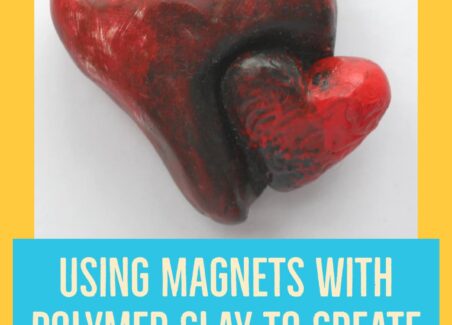 I love working with Polymer Clay. Its versatility and the possibility to combine it with other materials for mixed media projects (something harder to do with traditional clay that has to be fired) make it my media of choice for some projects. In 2011 I worked on a project that represented various emotions using hearts. Simple hearts, shaped initially by a mold, took on the shape and texture and feel of an emotion- and sometimes contained an interactive element representative of the emotion they represented.

In this post I want to demonstrate how a non-traditional addition to mixed media, magnets, can create interactive art that where even the action of the magnets is part of the communication of the art.

This piece represented the connection between hearts in an unhealthy relationship. “Love” becomes something darker- a magnetized attraction that pulls against efforts to move away.

Tiny neodymium magnets are strong enough to hold small pieces of polymer clay securely- and provide sufficient magnetic force that a person interacting with the piece can feel the movement of the art in their hand, which would be hard to create with typical ceramic magnets.

It took a bit of experimenting with magnets and polymer clay to get this project to work. Attempts to bake the magnets with the clay resulted in demagnetized magnets. (An accidental science experiment that led me to discovering, via google, that it’s related to how the atoms within the magnet are rearranged when the matter reaches a higher temperature)

Next, I tried sculpting my clay with the magnets in place, then prying the magnets out just before curing, leaving a perfectly sized recessed hole. Although this method didn’t completely conceal the magnets on the backside, as I would have hoped, it did work perfectly.

After my polymer clay baked and cooled, I added the magnets back, seating them in their recessed holes with super glue, and painted over them with acrylic paint.

In this project of hearts I made about 32 other hearts, most of which are very personal so I have not posted about.

If I was creating these chocolates again, I might go ahead and use the technique outlined above to add a magnet in the bottom of each chocolate- so they could be used and displayed as refrigerator magnets!

Clever smart artist. With a heart.