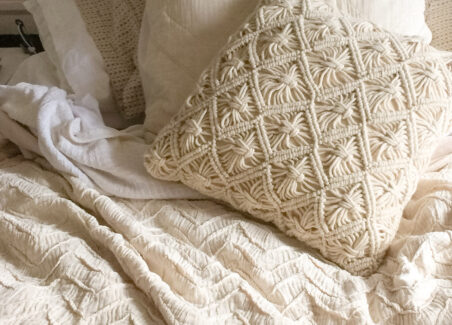 Confession: I have a Pottery Barn taste on a Target budget. I lust after expensive linens and duvets but for most of my life I’d convince myself to settle for something cheap, instead.

My conversion started way back in 2010, when I fell in love with the Anthropologie rosette quilt, and though it was far more than I was comfortable spending on a quilt, I bought it. I loved it, and once the rosette duvet was on my bed, I loved my bed, and loving my bed meant I loved my bedroom- and in the end, after using that quilt happily for years- I decided maybe a bed I love is an appropriate splurge for a master bedroom.

The Rosette quilt lasted me for years, but when I sold just about everything I owned and left my job to move to Seattle to start a new adventure, I needed my new start to include a completely new look for my bedroom. In my studio apartment in Seattle, the bed was a MAJOR feature of the apartment, so I wanted to make my bed look worthy of being the focal point.

As I shopped for affordable bedding to build the bed of my dreams, I fell flat. Leaning toward the texture of linen, the reviews for all of the linen duvet covers I looked over indicated constant ironing was a requirement. So I kept looking… until I fell in love with Anthropologie’s textured chevron duvet.

With a price that was about double my budget, I had trouble deciding if it would be worth it, but then the craziest thing happened…. my house in Missouri, which had been on the market for 10 months without an offer, sold to a cash buyer seemingly overnight. Saying goodbye was hard, but the sale put a little money in my pocket and creating a beautiful bed felt like an appropriate small splurge to indulge in before investing the remainder of the money.

I got “over” the chrevron craze earlier than most, so I was skeptical of featuring this pattern, however the tone-on-tone textured ridges spoke more to a classic pattern than to a trend, so I made the decision and waited for the duvet to go on sale. After religiously checking the anthropologie website for nearly three weeks, finally a 20% off coupon appeared as a daily special and I purchased the duvet, with a $50 discount as reward for my patience.

I ordered as I was packing for a trip to the Olympic National Forest. I’d never visited the Washington coast or the Pacific Northwest rainforests and my friend Carrie promised that autumn, when the fog is heavy and the bull elk are bellowing in search of the company of lady elk, is the best time to visit, so off we went on a girl’s weekend of adventuring through various short trails of the Olympic National Forest.

I came home to my package from Anthropologie delivered sooner than anticipated. I eagerly unwrapped my package but, since we were having an unseasonable warm spell in late October, I didn’t put my down comforter inside yet. Instead I used the unstuffed duvet as a quilt for a few weeks- and actually loved the look. When summer comes and the Pacific Northwest’s lack of air conditioning makes heavy bedding impossible, I’ll keep using this duvet as a light quilt, without the down liner.

The photo above does a great job of picturing what I like most about this comforter: the natural wrinkles of the weave of the fabric. The fabric looks like linen but isn’t. I like how this texture lends to being so forgiving- if I’d gone with a linen duvet wrinkles would be a problem, but this design makes any wrinkles that occur blend right in.

I didn’t realize until I penned this update that this Anthropologie duvet cover has now been my primary duvet cover for six years now! Through three apartments, one year of storage (while I traveled), and now in my new house, this bright ivory textured duvet cover has adapted to my changing styles and various bed frames and bedrooms.

I don’t know whether it’s because I choose classic colors and patterns, or if it’s the nature of Anthropologie duvet covers, but all of my Anthropologie bedding has been exceptionally long-lived. My rosette quilt lived on for years until I finally sold it, and this textured, linen-like ivory duvet hasn’t even needed a repair yet (although I noticed the other day that a few buttons are missing from the closure of the top of the duvet cover- an easy basic sewing repair)

How to Care for a Anthropologie Duvet Cover

Here’s my method for caring for and washing expensive designer duvet covers.

Using this method, each of my Anthropologie duvets and quilts have lasted for several years before showing any signs of wear:

1. Don’t set things on your bed

If you are accustomed to casually tossing stuff on your bed that may have touched the floor or the ground outdoors (like purses, backpacks, or shopping bags), try to break the habit. All that dirt and grime can transfer from durable outdoor fabrics to delicate bedding. Even if your duvet cover is easy to wash, excess washing can age the fabric.

When I need to use my bed as a working surface (for example, for re-organizing my walk in dressing room) I toss a sheet or a throw blanket down to protect my duvet from dirt and/or snags.

2. Keep the room clean to reduce the frequency of duvet cover washing

By minimizing how much dirt or dust is transferred from other areas of your home to your duvet cover, you can reduce the frequency of washing. This advice goes for what goes under the duvet as well: always keep a clean sheet between the duvet cover and bodies sleeping in the bed.

If you don’t have an oversized washing machine at home, I recommend taking your duvet to a laundromat- a quick wash in a large washer with plenty of clean water can be gentler on duvet covers than trying to squeeze them into a washer that’s just barely large enough. Portable washing machines usually lack the trouble-prone center agitator, but are too small for even a twin duvet.

Hi, just curious to find out how this duvet has held up...

I'm pleased with how well it has held up, although I'm pretty gentle with it. I've had other Anthropologie duvets/comforters come out of a wash cycle mangled, so this one I just spot treat as needed or hang up to air out from time to time. Other than a few buttons popping off of the closure it looks like new!