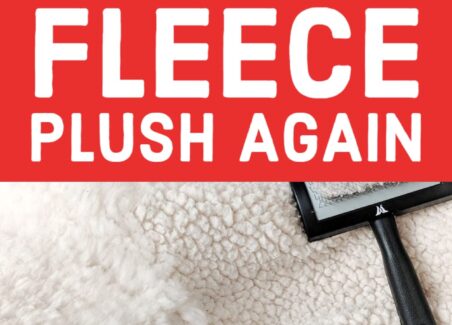 Last winter in Seattle was colder and wetter than most, and with my social media feeds filling with the comfort-loving aesthetic of Hygge, I decided I needed more cozy throws in my life. Unsatisfied with cheap throws and fleece blankets, I wanted a very substantial blankie- and I found it in an unlikely place.

Bainbridge Island is an island located 30 minutes by ferry from downtown Seattle. It’s the home of many of Seattle’s elite and it’s a popular day trip from Seattle for folks who like to recreationally ride the Washington Ferry System (like yours truly). When I cruise over to Bainbridge Island, I always poke my head in the thrift stores. It turns out, what the folks on Bainbridge Island want to toss out are often things I really want! Unironically, even the thrift store prices on Bainbridge are usually out of my budget, but last year when I went I found this Pottery Barn fleece and cable knit throw that was perfect for my apartment and just within my budget.

I found Pottery Barn’s $130 “Cozy Cableknit Throw” in Ivory at that island thrift store (but Amazon has a version of this blanket* if you’re crushing on mine). Featuring a chunky knit pattern on one side and ultra-soft plush fleece on the opposite side, this quickly became my favorite blanket to curl up under for winter-term grad school reading.

To my disappointment, after just one season my beloved fur blanket began to clump up like old grimy fleece. I was disappointed and began using my blanket less and less. I was still in love with it but worried that if I kept using it regularly, the fleece would deteriorate into a tired cheap-looking blanket instead of the luxurious blanket I loved.

While my blanket was stored for the summer season, I had a conversation with an older woman on how to care for sheepskin rugs. She told me that regular brushing with a carding brush would break up clumps and keep sheepskin fleece rugs looking new, so I decided to apply this same cleaning method to my fleece blanket, in hopes I could return the clumping synthetic fleece to soft fleece pile again.

First, I needed to locate a carding brush. While you can pick up a basic fiber carding comb* for around $12, with a little research, I learned that carding brushes and slicker style dog brushes are very similar and recently Burt’s Bee’s started making this charming little honeycomb-shaped wood and wire brush* shown below- bonus? It’s way cheaper than the carding comb.

Cleaning your faux sheepskin fleece and returning clumped fleece to fluffy pile isn’t hard! It does take a bit of technique, though. In the photos below I’m using a basic dog grooming slicker brush I picked up at a discount store- follow the same instructions if using a carding brush or this wood slicker:

To begin, place the blanket or fleece garment over your lap, smoothed with no wrinkles, and the tool in your dominant hand.

Grasp the edge of the blanket, brace the fabric against your knee, and with quick sharp strokes, begin scraping the carding brush over the fibers. The clumped fibers will tug and try to trap your brush, so the trick is to brush briskly, firmly, and not too deep at first.

It’s easy to get the wire brush tangled, so you’ll need to experiment with the right amount of pressure to get the wire tines just far enough into the fleece to comb without catching. As the fleece clumps break up you can press the brush a little deeper into your fleece.

You’ll need to repeat the action 6-8 times on one area, especially if your blanket has been allowed to clump significantly, as mine had. Pick a good Netflix, fix a hot drink, and settle in for the process of combing the full blanket.

I didn’t expect to also clean my blanket in this process, but was pleased to find that the brushing process picked up all the lint, thread, and fibers that the fleece had consumed into its tangles.

Loose fibers and – perhaps most satisfyingly – the debris caught in the clumps- will be trapped in your brush. Peel the loose fibers off your brush once in a while and keep combing until your blanket looks refreshed and clean.

If your fleece is very tangled or not tightly set in the base fabric you may find that you have many pulled fibers after “grooming” your faux fur.  This is expected and won’t harm your blanket, but if you want to neaten the fleece when you are done you can groom the surface of the fleece with scissors. Trim any fibers sticking up past the depth of the pile until your blanket is tidy, furry, and uniform once again.

Does this Method work on Real Sheepskin?

Yes! In 2019 I had the opportunity to spend several months in Patagonian Chile & Argentina. Interior design there often echoed the vast and stark landscape of Patagonia- where spaces often featured hard and angular materials.  What softened this design was sheepskin- sheepskin everywhere! I fell in love with the look and feel of sheepskin pelts on floors, chairs, sofas, and even beds. When I came home, I quickly built a collection of sheepskins that soften and add comfort to the unpadded, straight-backed chairs I prefer for working. Soon after, my sheepskin became matted from daily use and I began, as a matter of habit, regularly combing my sheepskin once or twice a month.

As someone who, previously,  once threw away a nearly new sheepskin rug just because it got matted, this was a game-changer! Turns out, with 5 minutes of combing once or twice a month, the fleece of both genuine and synthetic sheepskin stays soft and fluffy indefinitely. It even works to clean ugg boots and other sheepskin lined goods.

Love this! I have a Fleece jacket with that exact fiber. could I use this technique to keep the jacket nice an fluffy as well, you think?

Yes, I have used it on jackets! It can change the texture, though, so test a patch under the arm to be sure you like how the fiber looks after it's combed.

Hello, I admit I know nothing about fabric. So I have a question... Will this method work on the fake/faux fuzzy teddy bear type jackets? I have an H&M faux teddy bear jacket, a few faux furry throws and a house robe that is lined in this material as well. And they collect all kinds of things that seem to get quite stuck in them (pet hair, bits of thread and other random fuzzy bits) and I'd love to be able to get them looking new again, but also don't want to destroy my items (as I love them so much!). Thank you

Thanks for this, does this pull the fleece out? Making what's left on the blanket thinner??

You'll lose a bit of fiber, but- a bit like combing a pet- the fiber that comes out via combing is fiber that was either (1) just barely attached in the first place or (2) already loose, and being held in place by matter fibers!

Thank you for this article!!!! Answered the questions I needed to know, offered a product to use, and showed before and after. Couldn’t ask for more!

Thanks again, take care, and be safe!!!